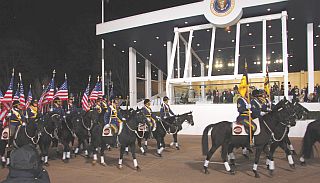 “Securing the invitation is always the biggest challenge,” said Ed Little, director of Horsemanship operations. “It’s such an honor. I think the Troopers of 1913 would be very proud to know that Culver is still a part of the parade.”

The 2017 Inaugural Parade marks the 104th anniversary of the primary reason the Black Horse Troop made that first trip to Washington, D.C. The mounted unit served as the official escort for Vice President Thomas Marshall during Woodrow Wilson’s inaugural parade in 1913 and again in 1917. Marshall – as is Pence – was governor of Indiana prior to his election as vice president.

“We are honored to be invited to take part in the Presidential Inaugural, the 16th for our school,” said Head of Schools Jim Power. “It is a privilege to continue this prestigious tradition, and reflects Culver’s time-honored values of leadership and service.

Fifty-six boys from Culver Military Academy’s Black Horse Troop and 24 Equestriennes of Culver Girls Academy, plus members of the Horsemanship staff and adult chaperones, will make the trip to Washington.

Culver’s student riders represent 17 states and 10 countries. Nearly 90 horses will be transported by Sallee Horse Vans of Lexington, Ky. The weekend is much more than a parade, however, as students will tour the city and will be honored by alumni and parents joining in the historic weekend.

“It is a privilege to play some small role in this quadrennial event, and we hope all Culver alumni and friends share the pride we have in our student participants,” said Director of Alumni Relations Alan Loehr Jr.

The 2017 inaugural will mark the 17th appearance in the parade for the Black Horse Troop and the eighth for the Equestriennes. After the 1917 inaugural parade, Culver went 40 years before returning to Washington in 1957 for President Eisenhower’s second term. The school has been represented by mounted units at every parade since, except in 1993 when an invitation for President Clinton’s first inaugural parade was not extended.

The parade will be televised live on several networks with uninterrupted coverage on CSPAN.