On Friday Marshall County Republic Chairman David Holmes announced a caucus to fill the seat that Michael Delp will vacate when he resigns his at-large seat on the Plymouth Common Council.  Delp will resign his position at the end of the year to become the Marshall County Commissioner.

On Monday two candidates filed their intentions to seek the open seat.

William “Bill” Walters filled his paperwork in the Clerk’s Office.  Last year Walters ran for one of the new at-large seats created when the city’s population went over 10,000.  Walters was successful in the primary but fell just short of a win in November.

Bill is semi-retired and works part-time for Older Adult Services driving the public transportation van.  He said he drives about 250 miles a week primarily on the city of Plymouth streets.  He knows which streets need work and what sidewalks need to be replaced or what yard needs to be mowed.    Walters said he has the time to dedicate to the job. 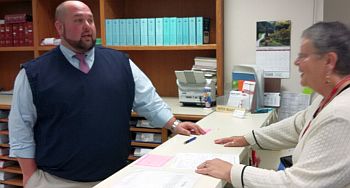 Burke Richeson also filed his intentions but with Republican Chairman David Holmes on Monday.  Burke is a local attorney and was on the municipal blot last November for one of the new at-large seats.  He was one of the six individuals seeking to fill the 3 at-large seats but fell short.

Burke said his is blessed to have many experiences that will be a good use to the city.  He said, those who can serve should and following the 2015 Municipal election wanted to be involved.  He is now on the Discover Plymouth Board and also the Plymouth Chamber of Commerce.

Mr. Richeson said he wants to keep the city moving in a positive direction.  He feels getting younger men and women involved with new ideas and diversity is helpful for the city and at the same time allowing them to learn from those who have the experience on the city council will be beneficial.

The republican caucus is scheduled for 5:30 on December 8th at Republican Headquarters in Plymouth.   The decision on who will fill the at-large seat will be determined by the four precinct committee people.