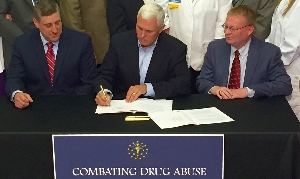 Indiana leads the nation in meth-lab arrests, and Head said, “We need to target people who purchase cold medicines for the purpose of making meth.” He continued, “It was important to balance this priority by not punishing honest citizens who need access to medicine for themselves or their families.”

This new law will not make cold medicines like Sudafed prescription-only.

The Senator said, “SEA 80 will instead decrease the sale of ephedrine and pseudoephedrine to those who use it to poison our communities with meth. That was my goal at the beginning of the legislative session, and I believe we have accomplished that with this bill.”

Senator Head thanked Dr. Harry Webb and the Fulton County Citizens Action Committee for taking on this important issue and fighting back against the meth problem in their county.

It was only fitting that Senate Enrolled Act 80 was signed into law Thursday at Dr. Webb’s Pharmacy in Rochester.