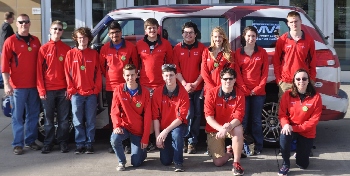 The Plymouth High School Robotics Team 586A headed to Louisville, Kentucky to compete at the VEX Robotics World Competition on Wednesday, April 20.  The competition runs Wednesday through Saturday, April 23!

Their destination is the Kentucky Exposition Center, 260 plus miles south where they’ll be facing competition where close to 500 robotics teams from around the globe will converge!

Plymouth High School Project Lead The Way teacher and PHS Robotics Coach Rich Schieber said, “It is a great competition and a great opportunity for our kids to interact with other students from foreign countries.”

This will be Team 586A’s third trip that they have earned to the VEX Robotics Worlds Competition.

The 2016 VEX Worlds, presented by the Northrop Grumman Foundation, brings together top robotics teams in the VEX IQ Challenge, VEX Robotics Competition, and VEX U under one roof to celebrate their accomplishments and participate with the best teams from around the world. VEX Worlds will include top teams from events happening in cities around the world from June 2015 to March 2016. Teams will play the game Nothing but Net during the 2015-16 season.

To check out a list of teams who will be competing this year, to view the live webcasts of the events, or to view the results throughout the three-day competition visit the following link: http://www.robotevents.com/re-vrc-16-3279.html