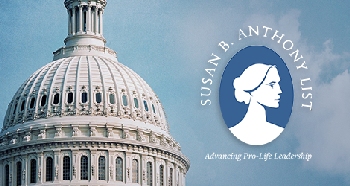 Tuesday, Representative Jackie Walorski (IN-02) received the endorsement of Susan B. Anthony List at an event at Elkhart’s RETA Life Center yesterday with pro-life leaders from across the district and state of Indiana.

“In Indiana and in Washington, Congresswoman Walorski has been a leading voice for unborn children and women.” said the Hon. Marilyn Musgrave. “We are proud to endorse her re-election campaign and look forward to her return to Congress where she will champion pro-life, pro-woman policies.”

Walorski said, “I am honored to have the support of the Susan B. Anthony List and so many pro-life leaders from across the district who joined me today. Defending the unborn is one of my greatest callings and as a legislator, I take personally the importance of standing up for those without a voice as well as their mothers facing difficult circumstances.”

The Susan B. Anthony List and its affiliated Political Action Committees, the SBA List Candidate Fund and Women Speak Out PAC, are dedicated to pursuing policies and electing candidates who will reduce and ultimately end abortion. To that end, the SBA List emphasizes the education, promotion, mobilization, and election of pro-life women at all levels of government.  The SBA List is a network of more than 365,000 pro-life Americans nationwide.