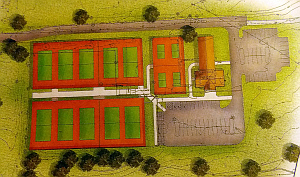 Bids were opened last month from two companies; Ziolkowski Construction and Michiana Contracting. A base bid of $1,799.200 from Michiana was the low bid while Ziolkowski bid $1,923,500.  These base bids did include the four small courts and lighting for the courts and parking lot.

Park Board President Dave Morrow said the committee’s recommendation is to proceed with construction of the new courts but not include the small courts, lights, masonry entrance or improvements and addition to the Freyman Shelter.  He said they are still short $160,000 to complete the basic court construction. Committee members were Morrow, board members Jim Causey and Mike Kershner and park superintendent Mike Hite.

The City of Plymouth has allocated $750,000 for the project and the Plymouth Community School Corporation has made a substantial donation to the project too. After renegotiating their current agreement with the park, the school contract was reduced $10,000 a year until 2040.  With that concession the school will be putting a total of $500,000 into the project. Private donations still left for the project are over $100,000….remembering that $80,000 has already been used for the design phase of the project.

Park Board President Dave Morrow did say the infrastructure for the lighting project would be included in the initial project while purchase and installation of the lights would be at a later date.

The park board did not award the bid during Monday’s meeting pending final funding.