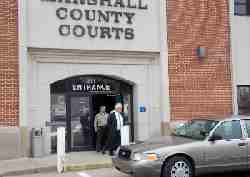 The jury in the criminal case against the former CEO, David Ferguson, of Stone Creek Homes, Inc. of Plymouth, IN and Central City, NE found Ferguson guilty on 13 of 14 counts against him following a three day trial. The trial began on Monday, March 8, continued through Wednesday, and ended with the jury’s verdict on Thursday.

Superior Court Judge, Robert Bowen, gave instructions to the jury near noon and Prosecutors, Nelson Chipman and Matthew Sarber, Defense Attorney, Michael Tuszynski, and other interested parties were notified near 4:30 P.M. that the jury had reached verdicts on all counts.

Following the verdict, Chipman did make a few comments. Referring to sentencing, Chipman said, “Sentencing has been set for April 14. I’m going to argue for the maximum.” 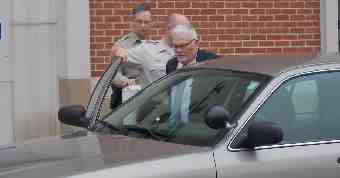 Ferguson was transferred to the Marshall County Sheriff Department immediately following the verdict. Bail was set by Judge Bowen at $50,000. He has been out on a $15,000 since he turned himself in on July 7, 2014.

Ferguson’s business partner, Alan Donahue, had been charged on 11 counts; however, an agreement was reached prior to the trial to allow Donahue immunity in exchange for his truthful testimony.

The charges stemmed from taking down payments from local businessman Jeff Jones in the amounts of $78,426, $74,385, and an additional $74,385. Jones had entered into a Build for Inventory Program where housing units were designed and built for workers associated with oil fields. According to testimony during the trial, the units were never built.

According to Jones, Stone Creek Homes offered to presale the units while in production to customers or investors who didn’t want to stand in line for the 90 day production cycle. The majority of the State’s 52 exhibits presented during the trial were emails and phone records between the two parties.

Court records also show that Ferguson took a down payment of $233,000 from Todd Morse of Fargo, ND. Morse wired transferred the funds as a down payment for units that he planned to add to his existing motel in North Dakota. According to testimony by Morse, the units were to be delivered in time to be up and running in July of 2012. Those units had never been put on production lines.

Three former employees who had been salaried while working at Stone Creek Homes did not receive pay for their last 5-6 days of work prior to the closing on the business. Additionally funds had been withheld for health insurance premiums that were never forwarded to the insurance carrier.

Stone Creek Homes in both locations ceased operations without any warning to employees or customers on May 24, 2012.

The where-a-bouts of both Ferguson and Donahue was not known for several months until WTCA Radio found pictures of internet marketing of Ferguson from Snyder, Texas.