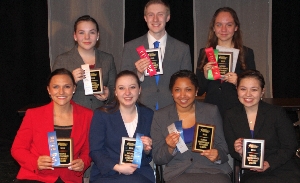 Other PHS finalists and alternates by event included the following:

Twenty-seven members of the team will leave for the State finals at Fishers High School after school on Thursday and plan to return with another top finish after awards on Saturday!

Here are the final rankings for the PHS students who did not qualify to the national tournament.

• Elizabeth Szalay was 3rd in Informative (alternate to nationals)

• Meghan Egierski was 4th in Humor (alternate to nationals)

• Trevor Pletcher and Lexi Ramires were 5th in Duo

• Jillian Smith was 5th in Drama

• Elizabeth Polstra was 6th in Drama

In other Plymouth High School Speech and Debate news PHS was recognized for receiving the National Speech and Debate Association Leading Chapter Award! According to a letter received from the National Speech & Debate Association NSDA, “This is the highest honor the Association can bestow upon a chapter. Only one school in each district attains this designation each year, and it must wait at least five years before being eligible again. Out of more than 3,000 schools nationwide, Plymouth High School is one of only 110 to receive the Leading Chapter Award.”

(Back Row Standing L to R):