04/08/14 Michael Lintner from Marshall Starke Development Center appeared before the Marshall County Commissioners with his annual update.  Instead of just spouting a bunch of numbers for the current enrollments of the various programs, Lintner brought along a client who spoke of his personal experiences. 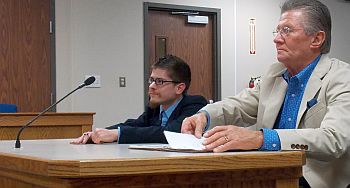 Gilbert Harrington has been a client with Marshall Starke since 2008.  He lives in the supported living program and works at the center woodshop.  The supported living program provides staff support for the three home’s residents who pay their own rent.  Staff is at the home from midnight until 8 a.m. and again from 4 p.m. until midnight.  Harrington is out of the house from 8 to 4 when he’s at work at Marshall Starke.

Harrington said he enjoys the outings he’s able to do with Marshall Starke, noting some of them; swimming, assisting at the food pantry, working out at Ace Fitness and serving meals-on-wheels to others who can’t get out.  He also said he likes working in the wood shop.  He grinds the ends of fiberglass shower bars for Maxx.

Mr. Lintner said they currently 7 homes with 22 clients in the supported living program.  He said, “It’s a relatively independent living.  Group home living is on the way out.”

Marshall Starke provides transportation for these clients and many others.  Lintner said, “Being able to buy gas from the County saves them approximately 50 cents a gallon.”  From July of 2013 through February 2014 they have purchased $46,266 of fuel from the county.

Current enrollment numbers for 2014 include 225 adults, 182 in HeadStart and 40 in early HeadStart for a total of 447.  Looking at those from Marshall County enrolled in the various programs include 80 in the Adult Day programs, 12 in the Industrial program, 13 who are employed, 15 in the Follow Along program, 91 in HeadStart and 20 in Early HeadStart.