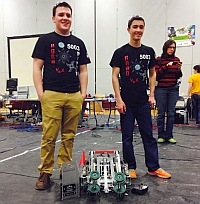 02/25/14 Plymouth High School Juniors Josh Kuhn and Kennedy Schneiders are, together, an independent robotics team known as Team 5003 – The Robo Ninjas.  They compete around the state in VEX Robotics Tournaments and are the defending Indiana State Robotics Champions.

Last April this team competed at the VEX Robotics World Championship in Anaheim, CA and finished in 60th place out of 300 teams comprised of high school students from all over the globe.

They will be defending their reigning State Champion status this weekend with the 2014 VEX Robotics Toss-Up State Championships at Warren Central High School in Indianapolis.

This Thursday night, as the Plymouth boys basketball teams conclude their regular season with a home game vs. Wawasee, Josh and Kennedy will have a display set up in the front lobby outside of the gymnasium where people can see their award-winning robot in action and find out more from the boys about what they do and how they have been successful.

The Robo Ninjas will also be collecting donations to help fund their team and their chance to attend the World Championships for a 2nd straight time this April.