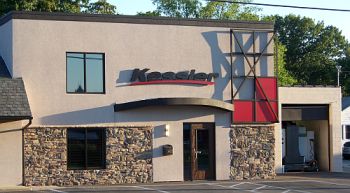 08/29/13 A locally owned company that was recently listed on the Indiana Economic Development Corporation’s “Company to Watch” appeared before the Plymouth Common Council Monday night seeking a tax abatement.

Derek Spier from the Marshall County Economic Development Corporation said Kessler Crane, currently located on East Jefferson Street will be relocating to Western Avenue into the former American Container facility.  The move will allow the home grown company to stay in Plymouth and expand the production said of things and also the research and development side.

Kessler was established in 2003 as a company that makes cranes to support cameras for the motion picture industry.  CEO, Eric Kessler said he was between jobs and used his pole barn at Lake of the Woods to make the cranes for some friends.  He said the motion picture industry was looking to change over from analog to digital cameras and many of the equipment providers didn’t think it would happen.  Kessler said, “We didn’t have anything to lose so we went ahead and mad the change and when the industry went digital we were there to fill the need.”

Kessler is experiencing significant growth and currently has 50 employees in the Jefferson Street location.  Councilman Shawn Grobie said, “They are busting at the seams.”

Moving to the Western Avenue facility will require an $800,000 rehabilitation of the property.  They will also and $1.2 million in new equipment.  Kessler is seeking a 5 year personal property abatement and a 6 year real property abatement. They have pledged to hire an additional 40 employees by 2015.  The current average wage is $33,000 a year and with the pending project that rate will raise to $35,000 yearly.

On Monday they the Common Council unanimously approved the resolution declaring the property to be within an “Economic Revitalization Area.”

The Council will conduct a public hearing on the tax abatement at their first meeting in September.