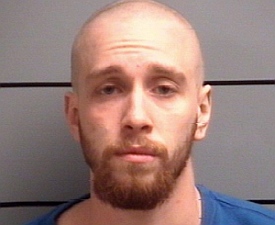 07/25/13 Shawn E. Brown, 27, of Bremen was sentenced today in Marshall Superior Court No. 1 to 10 years imprisonment for manufacturing methamphetamine and an additional year of imprisonment for resisting law enforcement. No part of the sentences were suspended, and were ordered to be served concurrently.  Brown admitted that on February 15, 2013, he along with several other persons were cooking pseudoephedrine based products into methamphetamine at the Country Place Apartments on West Madison Street in Plymouth.  The property is a family housing complex and is immediately adjacent to a public park, both factors of which enhance the seriousness of the offense to a Class A felony.  Brown, through a plea agreement, plead to a Class B felony.  Brown also plead guilty to offense of resisting law enforcement, a Class A misdemeanor, and received the maximum sentence allowed under law of one year of imprisonment.

Judge Robert O. Bowen approved an agreement reached between Chief Deputy Prosecuting Attorney Nelson Chipman and defense attorney Burke Richeson, which provided for a sentence at the Indiana Department of Corrections of 10 years of imprisonment for the manufacturing methamphetamine charge, and one year of imprisonment for the resisting law enforcement charge.

The case began when the manager of Country Place Apartments saw an individual enter an apartment to whom a “No Trespass Order” had previously been issued and was on file with the Plymouth Police Department.  Officer John Weir and Corporal Ray West of the Plymouth Police Department responded to the second floor apartment, and immediately detected a strong odor of ammonia.  They also noticed that on a bitterly cold day the windows to the apartment were open.

After knocking on the door, the officers could hear the screams of a young child.  Eventually the door was opened and the smell of ammonia became stronger, almost overpowering, and the room air had a cloudy tint.  The officers entered the apartment and saw two young female children, later determined to be 2 and 5 years of age.  They were not Brown’s children, but another person’s children that was in the apartment and who was also charged.  Eventually, Plymouth Ambulance arrived at the scene and took the two children to the emergency room at St. Joseph Regional Medical Center to be decontaminated and custody transferred to the Department of Child Services

Officer Weir soon found the individual against whom the “No Trespass Order” had been issued and took him into custody.  At the same time, no less than four individuals jumped out of the second floor windows and ran in different directions.  Two of the four escaping individuals were soon apprehended by quick acting Plymouth Police officers who had been called to the scene for assistance.  Brown was one of the persons who jumped out the second floor window and who was seen running with a backpack. That is the basis of the resisting law enforcement charge.  The remaining individuals in the apartment were also put under arrest.  A total of 10 adults were either arrested or identified for having a part in the production of meth.

The backpack was located in the vicinity of Brown’s arrest.  In it were numerous laboratory items and precursors for the manufacturing of methamphetamine.  Also located was a syringe in the bandana Brown wore on his head.

A search warrant was prepared, submitted to and approved by Judge Curt Palmer later that day.  One of the rooms in the apartment was locked requiring the necessity of kicking in the door.  Within that particular room was an active methamphetamine lab and almost 6 grams of finished methamphetamine product totally over 8.5 grams.  Other rooms in the apartment also contained drug paraphernalia including numerous syringes and used pipes.

Plymouth officers assisting at the scene included David Bacon, Shelley Cleveland, Jim Cox, Steve DeLee, Mark Owen, Ray West and John Weir.  Indiana State Police assistance was provided by Jason Faulstich, Keith Bikowski, Ryan Lebo, Robert Leffert and Brandon McBrier.  Chipman credited all the officers for their quick reaction and assistance in apprehending the suspects in a rather chaotic scene with people jumping out of second floor windows and running in all directions.