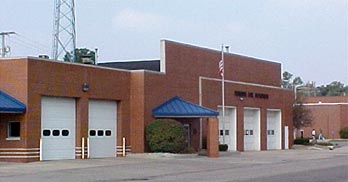 07/25/13 Plymouth Fire Chief Rod Miller asked members of the Board of Public Works and Safety for approval to seek quotes to replace one of the three ambulances in the department.  Medic 1 is the red ambulance and is a 2007.  The next ambulance on rotation is known as Medic 2 and is an early 2000’s while Medic 3 is from the mid 90’s. Miller will advertise specifications to bid an new ambulance yet this year using an additional appropriation.

The Fire Chief was given approval to do some remodeling projects at the Fire Station. Projects include replacing the 20 year old carpet, painting, toilet and shower improvements. Miller since the roof has been replaced every time they replace a ceiling tile it stick-out like a sore thumb so he would like to replace all the  tiles.

Members of the Board of Public Works and Safety also accepted the Fire Chief recommendation to offer conditional employment for two new full time employees.  Landon Lauber was selected for the full time fireman’s position and Nathan Skoviak the full time paramedic.