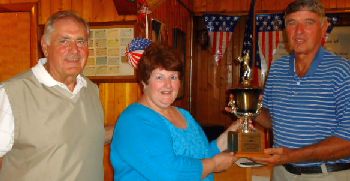 10/19/12 This year Starke County Chamber of Commerce offered teams the opportunity to golf for a 3 Tournament Trophy.  Traditionally, Starke County has had 3 Golf Outings with The Chamber, Stark United and Junior Achievement.  The Chamber Golf Committee wanted to promote teams golfing in each of the outings and offered a trophy for the team that had the best total aggregate from the three outings.  First National Bank of Monterey had the lowest score with a total of 170 – no handicap included.

Volunteers at the Chamber Outing included: Barbara Allen of First National Bank of Monterey, June Binkley of Binkley Real Estate, Carol Blastic, Judy Caudill of 1st Source Bank, May Crider of Lindenwood Conference and Retreat Center, Lynn and Gail Flora, Joan Ludwig of CenturyLink, Ben and Dorothy Osinski of Osinski Auctions, Mary Lynn Richie, Tom Sibal of Ancilla College, and MJ Zembala of North Judson San Pierre Schools.  Without their help the day would not have been as successful.

The Chamber is people … People just like you.  Through the Chamber members we realize how we can accomplish collectively what we cannot achieve individually, shaping Starke County’s business quality of life.  Members of the Chamber, more than 150 strong, work continuously to improve the economy of our community.”  For more information about the Chamber, please call Debbie Mix at dmix@starkecountychamber.com or 574-772-5548.