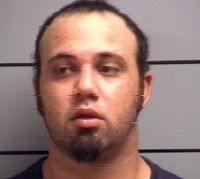 10/11/12 On Thursday, October 4th at 1:30 PM Patrolman Jonathan Bryant with the Marshall County Sheriff’s Department responded to the 1700 block of Ritter Street in Plymouth to serve an active warrant on 29 year old Arthur Lawrence.   The warrant was for dealing, delivering, manufacturing methamphetamine.  Officers located Mr. Lawrence and discovered more narcotics at the residence and a search warrant was then executed.

During the search several “one pot” meth labs were located along with a multitude of meth paraphernalia and meth. The Indiana State Police Clandestine Lab Team was then called to the scene and took possession of all the hazardous materials.