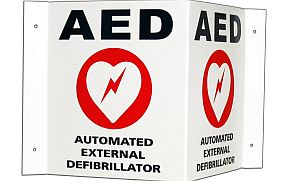 10/04/12 The Marshall County Commissioners decided to enter into a service agreement with Physio Control for two AEDs.

John Grolich told the Commissioners Monday that there are two AEDs, one in the County Building and one in the Court House that were purchased by them several years ago.  He explained that they use to be covered by a service contract the Sheriff had but Sheriff Chamberlin has decided to go with an as needed program instead.

The service contract covers repairs, annual evaluations and certifications and replacement of the batteries every two years.  Grolich said, “They will test the whole device including the electrical output.”  He estimated it has been two to three years since the AEDs have been checked.

The service agreement is $630 annually for both devices.

Grolich noted that at least 6 people are walking around today after being successfully shocked and resuscitated because of the use of an AED device.

The commissioners did ask if the AEDs in the deputies cars have been certified annually and Grolich said he was unsure.