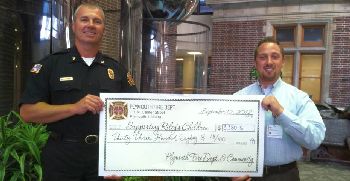 09/21/12 Local firefighter John Pasley was in Indianapolis to present a check to Riley Children’s Hospital earlier this month.

You might remember us talking about John Pasley on the radio.  He was the Plymouth full-time firefighter who decided he wanted to raise awareness of the fantastic things that Riley Children’s Hospital does.  He has firsthand knowledge of the medical center because of couple of Plymouth volunteer firefighters have children that have been or are being treated and doctored at Riley. 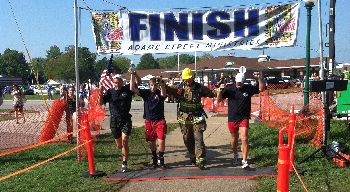 John decided he would spark interest in the fundraising by donning his fire gear and running in the 15 K (9.3miles) Blueberry Stomp on Labor Day.   A couple of weeks prior to the race he placed nearly two dozen fire boots in various local businesses to collect additional donations.  When all was said and done he had raised $3,380.18.

Fire Chief Rod Miller joined Pasley on his trip to Indy for the check presentation.  Prior to the ceremony there were treated to an extensive tour of the hospital.  The money raised has been designated for the “Magic Cart.” The cart is filled with toys and if a child has had a rough day the cart pusher will offer a toy from the cart to brighten their day. 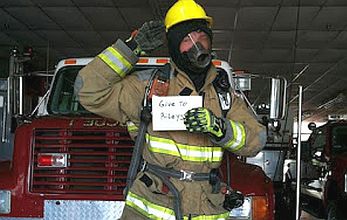 Firefighter Pasley is extremely thankful for the support he received from the communities in Marshall County.