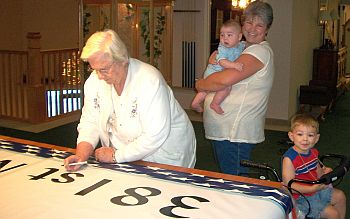 09/06/12 Angela Drake of Plymouth is counting the days until her husband Scott arrives home from his tour with the Plymouth National Guard in Afghanistan.   Until he does get home she has plenty to keep her busy with their two young sons Colton, 2 and Kamdon, five months.

She is also busy helping other family members plan a “Thank You” party which will be held in March 2013 for the men and women of the 381st MP CO.   While some will be home before March they want to include the entire unit in the party.  That is why they have chosen the month of March.  The group would like as many signatures on the banner as possible.

Since Angela’s grandmother, Claire Amor lives at Miller’s Senior Living Community she wanted to give her and her fellow residents a chance to sign the banner.  She displayed the banner on Tuesday afternoon, September 28 so those at the facility could write a note of gratitude to our Plymouth soldiers.