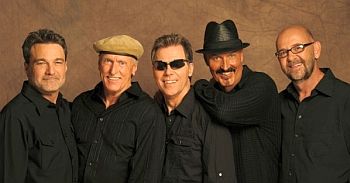 08/31/12 Exile is returning to the stage some 23 years after they last played together. In 1978, their No. 1 pop single “Kiss You All Over” topped the charts. Other singles did the same as their popularity continued into the 1980’s.

Now they’re making a comeback with the original band members. The group is comprised of J.P. Pennington on guitar, Steve Goetzman on drums and percussion; Sonny Lemaire on base as well as vocals; Marlon Hargis on keyboards; and Les Taylor on guitar and vocals. Most of the band’s hits were written by Pennington and Lemaire. Lemaire continued penning music even after the band went their separate ways.

Despite being criticized in the 1980’s for injecting a rock attitude into country music, they ran up ten No. 1 country singles, including “I Can’t Get Close Enough,” “Crazy For Your Love” and “She’s A Miracle.” Rock married to country hasn’t hurt such acts as Rascal Flatts and Taylor Swift. One thing that is different today, however,  is the tone of the messages in country music.

Pennington offered his thoughts. “Lyrically, things have changed quite a bit,” he  said. “I think lyrics are more serious and more life-oriented now. It seems singers are more careful about what they say…and maybe artists are more careful because their plans are longer-range. I think people look at writing like a building block in a career as opposed to ‘We need a hit now’.”

They had their first new release in over two decades entitled “People Get Ready” released in 2010.

Recently the Kentucky Music Hall of Fame and Museum announced they will be part of the 2013 class of Kentucky Music Hall of Fame and Museum inductees. They will join other Kentucky native music professionals including The Hilltoppers, Old Joe Clark and Skeeter Davis among others to be honored for their contribution to music in the state of Kentucky and around the world. The induction takes place on April 12, 2013 in Lexington.

They also appeared with Trace Adkins on ‘Hit Exchange’ on a GAC TV special. The show afforded an opportunity for Adkins to choose the one song he would want to go back and record with the original band. He chose “Kiss You All Over”, their 1978 smash hit…and considered one of the sexiest songs ever recorded, according to GAC.

To learn more about the group, visit their website at www.exile.biz.

Look for them to take center stage on Michigan Street at 8 p.m. Saturday, September 1.