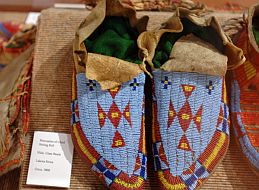 07/19/12 A century-long relationship between Culver’s Woodcraft Camp and the American Indian is being celebrated in July with a public exhibition of Indian artwork and artifacts in the Wolfe Gallery of the Crisp Visual Arts Center on the campus of Culver Academies.

“First Americans at Woodcraft” is a free exhibit and open to the public from 1 to 5 p.m. each Sunday during July. Guided tours are available by contacting Bob Nowalk at (574) 842-8278 or by email at robert.nowalk@culver.org. The Crisp Center is located on Academy Road between Eppley Auditorium and Logansport Gate.

Woodcraft is celebrating its 100th year this summer, “and Woodcraft has always had this Native American connection,” said Nowalk, the museum curator and the Academies’ visual arts coordinator. American Indians have been visiting, lecturing, and teaching at Culver since its earliest days. The exhibit includes photographs of the key American Indians who spent time at Woodcraft Camp: Winnebago Chief Bear (1927), Pueblo Chief Ray Silvertongue (1933-35), Blackfoot Chief Bull (1933), and the Choctaw Red Wolf (1946).

Culver’s collection, spanning the early 1800s to the present, includes paintings, photographs, art prints, Navajo and Hopi rugs, basketry, beaded moccasins, musical instruments, and an Indian child’s playthings. Two well-known sculptures by Cyrus Dallin are also featured, “Appeal to the Great Spirit” and “The Scout.” Most of the collection has been gifted to the school by alumni.

The exhibit is dedicated to Richard Zimmerman (“Chief Z”), who has been a guiding presence at Woodcraft Camp for 61 summers in the Indian Lore and Indian Dance programs.

Caption: A pair of beaded moccasins (circa 1860) which once belonged to Sioux Chief Sitting Bull. Photo provided.