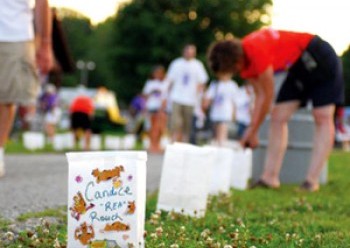 Even in a down economy, adversity brings people and funding together.

Even though this year’s attendance for the annual Relay For Life event was slightly down from a year ago, the results were a big success as the group was able to come within close reach of its $61,000 goal.

“We had 19 teams, about 500 people this year. Last year we had 28 teams show up,” said Marika Kunder, organizer of the event. “A lot of it has to do with the great weather. We’ve really been blessed the past two years with no rain and good weather for people to be out.”

Those in attendance spent the night celebrating life and helping others with many activities and family fun.

“We had face painting this year which was something new, and a big hit,” said Kunder. “We also invited the Bremen High School swing choir to perform for the first time and we’ve already had requests to bring them back again. They were great.”

As the sun came up, the light of day showed a wildly successful event.

“We started the night with $33,000 and at the end, we had $54,000,” said Kunder. “We still have teams working on some projects that haven’t turned in all their money. I think in an economy like this, that is excellent.”

One event still on the books for the Relay For Life fundraising effort will be in the parking lot at Woodie’s in Bremen as Bouthanh’s will be serving their Asian specialty’s Aug. 26, 27, and 28 to help the cause.

“Bouthanh’s never tells me exactly what percentage they donate to us, but I know that he’s very generous,” said Kunder. “There is still a television to be auctioned off at Ponderosa in Plymouth. Just keep your eyes open for Relay For Life projects. We still have some more to go before the end of the year.”