Another Plymouth home on the National Historic Register 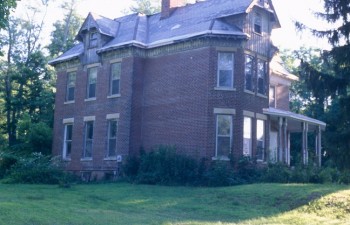 06/25/12 On the 15th of this month the Hoham-Klinghammer-Weckerle House became the second home in Plymouth to be recognized with the distinction of being listed in the National Park Service’s listing of Historic Places. Many locals have known the place as “The Underground Railroad House” and also as a favorite hangout of the Chicago Gangster John Dillinger. There are many different variations of stories of underground tunnels. To dispel the only rumor and folktale of the place, there are no tunnels. There are two left-over deep cellars from the brewery days where the beer would ferment on the property far removed from the house.

The property was initially purchased by a German immigrant name John Hoham, of whose family a street is named in Plymouth. He escaped a German prison, for which he was incarcerated for refusing to serve in the Army and came to the United States in the 1840’s. He later was joined by his sister (Magdalene) and her husband John Klinghammer. In 1857 they purchased the three acres for $75 and constructed the first brewery in the county, producing Lager Beers. The brewery was sold in 1871 to Jacob Weckerle, also a relative, for $15,000 who continued to operate it until 1888, at which time he moved to Chicago. The house appears on a linen map dating from 1882, though the actual date of construction is not completely clear. The brewery burned to the ground in January 1900, leaving the house and a few other buildings that have since been demolished due to a tornado in the late 1960s. At this point the underground rooms became inaccessible and remain this way today. A recent excavation confirmed that the rooms are in good order and will at some point be re-opened, but for the moment they are sealed in a way that would be impossible to access without heavy machinery for the safety of all concerned.

Many stories over the years have circulated about the house’s participation in the Underground Railroad which transported escaped slaves to Canada. There is circumstantial evidence supporting this in the form of a map indicating Plymouth as a stop on the way from Logansport to South Bend. As it was a crime in those days to harbor escaped slaves, no documentation would exist to prove this. There is however many from the day that were interviewed, including a descendant of the original family that does indeed confirm this. 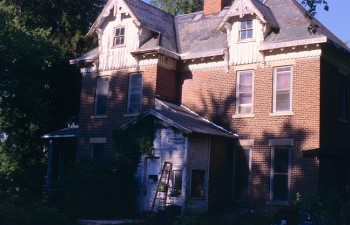 The property developed a special notoriety in the late 1920’s with the arrival of John Dillinger, known as Public Enemy Number One. He was a frequent guest along with many other notables of the time at the recently opened roadhouse. The roadhouse was operated by a couple of Madam’s from Chicago–but they were no Ladies! They operated a speak-easy and bordello in the home. A famous raid caused the place to be padlocked for a year and sent the proprietors to the Indiana Woman’s Prison.

Over the next twenty years the place sank into obscurity and was purchased by the architect Alves D. O’Keefe and his wife. O’Keefe was known for works such as the design of the Rees Theater and several other buildings in his long career.

The current owner, Andrew Sporner took ownership in April 2010 from the O’Keefe Family. Shortly after this transaction a proposition was made by Kurt West Garner of the Wythougan Valley Preservation Council to apply for listing in the National Historic Register of Historic Places. The owner whole-heartedly agreed. Through the support of Partners in Preservation, an Indiana-based group which underwrote the costs of this venture, the application process culminated in this listing on June 15.

More detailed information is being added to a website about the house periodically, including renovation progress can be found here:

Wythougan Valley Preservation Council is a Marshall County-based non-profit that organizes restoration activities through the county for endangered properties.  These have included Summit-Chapel School in Tippecanoe and Jacoby Church in Plymouth.  The organization was founded in 1999.  Partners in Preservation is a non-profit organization committed to underwriting the cost of listing eligible properties to the National Register throughout the State of Indiana.