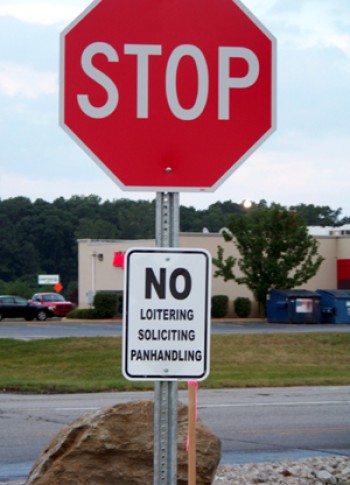 Anyone traveling on Oak Drive between Wal-Mart and K-Mart during the past couple of years have seen a number of individuals standing on the corners holding signs and looking for handouts.  Although the city doesn’t have an ordinance in place that can stop this situation one local business has taken a stand against it.

Last week Wendy’s placed a sign on the stop sign pole located at the southwest corner of Oak drive and Pilgrim Lane.  The sign is very specific: it says, “NO Loitering, Soliciting or Panhandling.”

Brian Foutz, Director of Operations for the local Wendy’s Restaurant said the reason for the sign was safety.  He said, “More than anything the sign was place for safety of those people who have been standing there.  They stand on our property and if anything were to happen we might be liable.”

Foutz said, “The day they placed the sign, there was a man standing there seeking a handout.  After posting the sign we told him he would need to move and he did without question.”  He continued, “We haven’t had an issue since the sign went up.”

Since the sign is on the private property of the restaurant, they now have the power request someone to leave and if they don’t the store can call the police and ask them to assist them.

Loitering is the act of remaining in a particular public place for a protracted time. Under certain circumstances, it is illegal in various jurisdictions.

Panhandling in the US) is to request a donation in a supplicating manner. Beggars are commonly found in public places such as street corners or public transport, where they request money, most commonly in the form of spare change. They may use cups, boxes or hats to collect the donations.