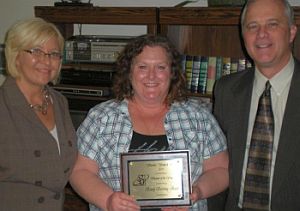 During the evening, Starke United was proud to announce their Volunteer of the Year: Sandy Kersting-Rudd. The Board President, Todd Zeltwanger, surprised Sandy with the award. Sandy has been the head of Vice-Chair of Allocations for two years overseeing the grant process. Annually, she organizes an event at Kersting’s Cycle Center to benefit Starke United. The event brings necessary funds to the organization to assist with programming. Sandy is also involved in the Starke United Auction: running errands, calling on businesses and working the day of the auction. In addition to donating her time, she has donated auction items, and personally contributed annually. She has stood as a perfect example of a person going above and beyond for the community she holds so dear. Sandy tearfully accepted an engraved plaque to show the organization’s appreciation.

During the evening, the organization reflected upon 2011; the agency raised just over $55,000.  Of those funds, approximately $11,000 will be forwarded to agencies of the donor’s choice.

In addition, Starke United assists in the community is by providing grant opportunities to local agencies. This year applications of $38,000 were received with $13,000 available for grants. Applications were reviewed by a committee of community members from mixed areas of the county. The recipient agencies were presented their awards at the dinner. Those agencies who received funds are: The American Red Cross, Bella Vita Pregnancy Resource Center, Catholic Charities Diocese of Gary, Community Services of Starke County, Dunebrook, Earthworks, Love INC, Starke County WIC, Starke County ABATE, Starke County CASA, The Caring Place, The Salvation Army Starke County Unit and The Starke County Youth Club.  Starke United’s grants are based upon community needs with a focus on education, health and income.

Lastly, the Starke United reviewed their progress and programs over the last year.

Kindergarten Countdown, an introduction to school for those never exposed

Boy Scout Food Drive, expanded to include the Girl Scouts and quarterly drives

JA More than Money, economics program after school in its third year

Familywize, a free prescription discount card available to anyone

211, an established hotline to assist individuals looking for area assistance