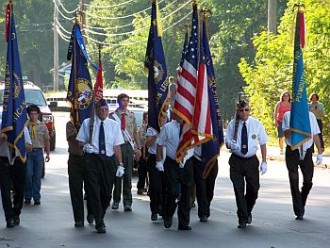 The service began with a silent procession to the Young Amphitheater from Michigan Street.  A Color Guard with representation from the American Legion, DAV, and VFW lead the way followed by Boy Scouts, the Plymouth Fire and Police and Bagpipe group. 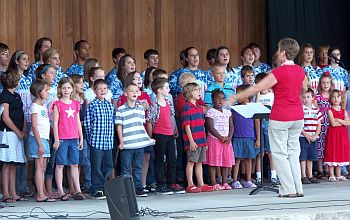 Members of the PHS Crimson Connection along with the Children’s Choir from the Plymouth Wesleyan Church, director by Mary Pat Glaub sang as the Color Guard and Boy Scouts entered the amphitheater.

Mayor Senter introduced Pastor Larry Marhanka who opened the ceremony with a prayer and said, “Four planes changed our world forever.”  He prayed for the “brave men and women who lost their lives in an effort to rescue workers in the World Trade Center Towers.” 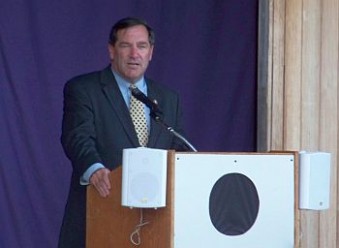 Congressman Joe Donnelly told those in the audience that he was driving to work in Mishawaka and heard the news of the planes flying into the World Trade Center.  He said, “Plymouth and Marshall County are the heart and soul of America.  As we face challenges as a nation, let’s all work together and show a little kindness to your neighbors.” 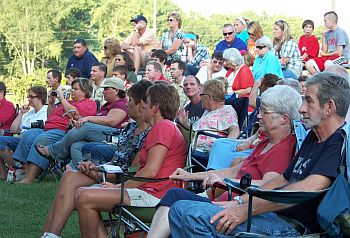 Mayor Senter gave a short speech and said, “There are periods of time etched in our minds, like the attack of Pearl Harbor, November 22, 1963 the  assignation of John F. Kennedy, and the Shuttle Challenger explosion on June 28, 1986.    September 11, 2001 is the day terrorists made their attacks on America.”   He said, “That day America changed and Americans changed. We are stronger, more spirited and more patriotic.”  Mayor Senter closed by saying, “Let’s never forger 9-11 2001. Not today, not tomorrow, not ever.” 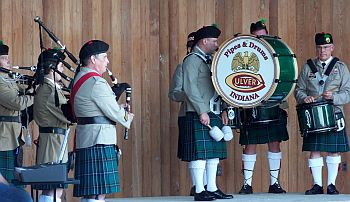 The service closed with the benediction by Pastor Herb Hiatt followed by “Amazing Grace” on the bagpipes from the Culver Pipe and Drum Corp and Taps.