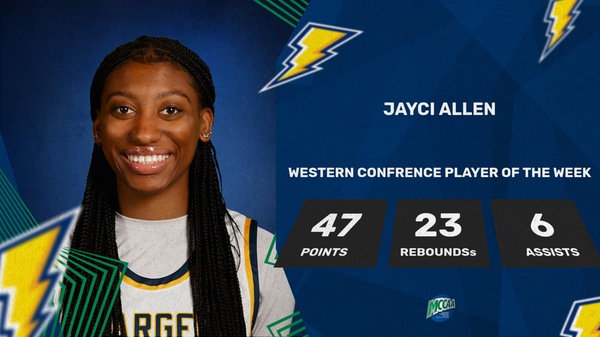 DONALDSON — Jayci Allen, a freshman from Richmond High School, was named the MCCAA Western Conference Player of the Week for the 2nd time this season.
Jayci led the Chargers to a 2-0 record on the week, including their 1st MCCAA Western Conference win over Southwest Michigan College.
For the week, Allen averaged an astounding 23.5 points and 11.5 rebounds per game and also added in 6 assists to go with 4 steals and 2 blocks. Jayci shot 56 percent from the field for the week, showing her consistent efficiency for the Chargers.
Head Coach Ryan Gould was very complimentary of Jayci’s stong play.
“Jayci is such a humble and hard-working player who wants to win. She is always in the gym working on her game and the work on her shooting is paying off in a big way,” he said. “She is just scratching the surface of who she can be as a player while at the same time being one of the better players in the MCCAA. Players like her are easy to take for granted because they are so consistent but she is someone that I appreciate on a daily basis.”
With their two wins this week, the Chargers moved to 12-4 and 1-0 in the MCCAA Western Conference.