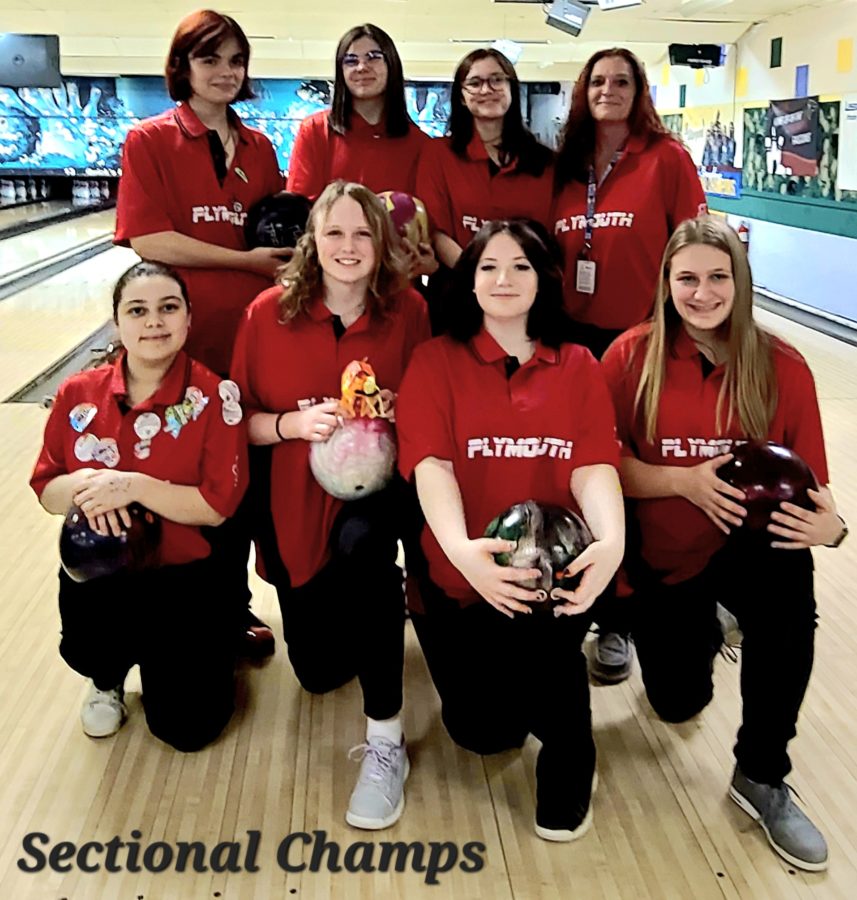 PLYMOUTH — For the first time in program history the Plymouth girl’s bowling team will be making their way to the regional round at Michigan City after taking the team sectional title.
“My girls never cease to amaze me at every turn,” said Plymouth coach Chasity Masterson. “They are truly a good team together. They work together as a team.
“We won conference champs and they haven’t done that since 2004. I don’t know if they have ever won a sectional. Regional is going to be very difficult. Keeping them all out of their heads is the key.”
“Bowling is a mental game more than anything,” said Masterson. “A lot of it has to do with the oil pattern. Everything has to be correct. You have to keep yourself out of your own head. Quit thinking. You know how to bowl. Stop, breathe and throw the ball.”
The Plymouth girl’s team of Aubrey Ferguson, Lucy Padilla, Hailey Neal, Aurora Davis, Silvia Gonzalez, Macee Good, and Ashlee Hampton tossed good enough games to send the team to regional competition this Saturday.
That goes with a conference championship trophy earlier in the year and making the mark with the high team average for a Plymouth high school girl’s bowling team.
Individually Neal and Padilla will be moving on after qualifying for that event.
Davis and Neal were also named all-conference second team.
Noble Bockman and Collin Strykul were good enough to move on to the regional round in the individual tournament.
Bockman placed third missing the top two by a spare of three pins.
“Noble stepped up,” said Masterson of her senior bowler. “Colin placed 17 out of 19 advancing to the regionals.”
“I’m really proud of Noble and Collin and Lucy and Haley for all stepping it up in their individual game.”
“My mom got me involved,” said Bockman of his start in the sport. “She was pretty good at bowling. She always talks about the night her team shot 1000. She got me into it.”
“I really don’t get nervous too much,” said Bockman of his strategy for Saturday. “Finding my spot at the beginning is important and switching balls if I need to. I feel like I’ve been shooting really good. I feel like last week I shot pretty good. This week the oil pattern is pretty tough but I’m shooting I feel good.”
The girl’s team will have a chance to move on led by senior Lucy Padilla who is cautiously optimistic.
“Last week I thought I was probably about 70-30 on the bad side. I don’t do good at tournaments. I just do well in practice,” she said with a smile. “This week it’s probably 50-50 to move on. The hardest part is picking up spares. It could go either way.”
“We have to play as a team because it’s a Baker’s Game,” said Masterson. “We won the sectional as a team. (In a Baker’s Game) Only five bowl at a time and each takes two frames per game. I can move them around to see what the best order is but it is a team game. It doesn’t give you much room for error.”
“I want to have fun,” she said. “Win or lose I want them to take home great memories and a great day. I can see this team surprising me and making it all the way. We need to shoot 150 games as a low game. But I stressed to them I want them to have fun.”
Plymouth will be in the regional round at 9 a.m. at City Lanes in Michigan City starting with the individual rounds. The team event will start at 2 p.m.