Snow Shoveling Can be Hazardous to Your Heart 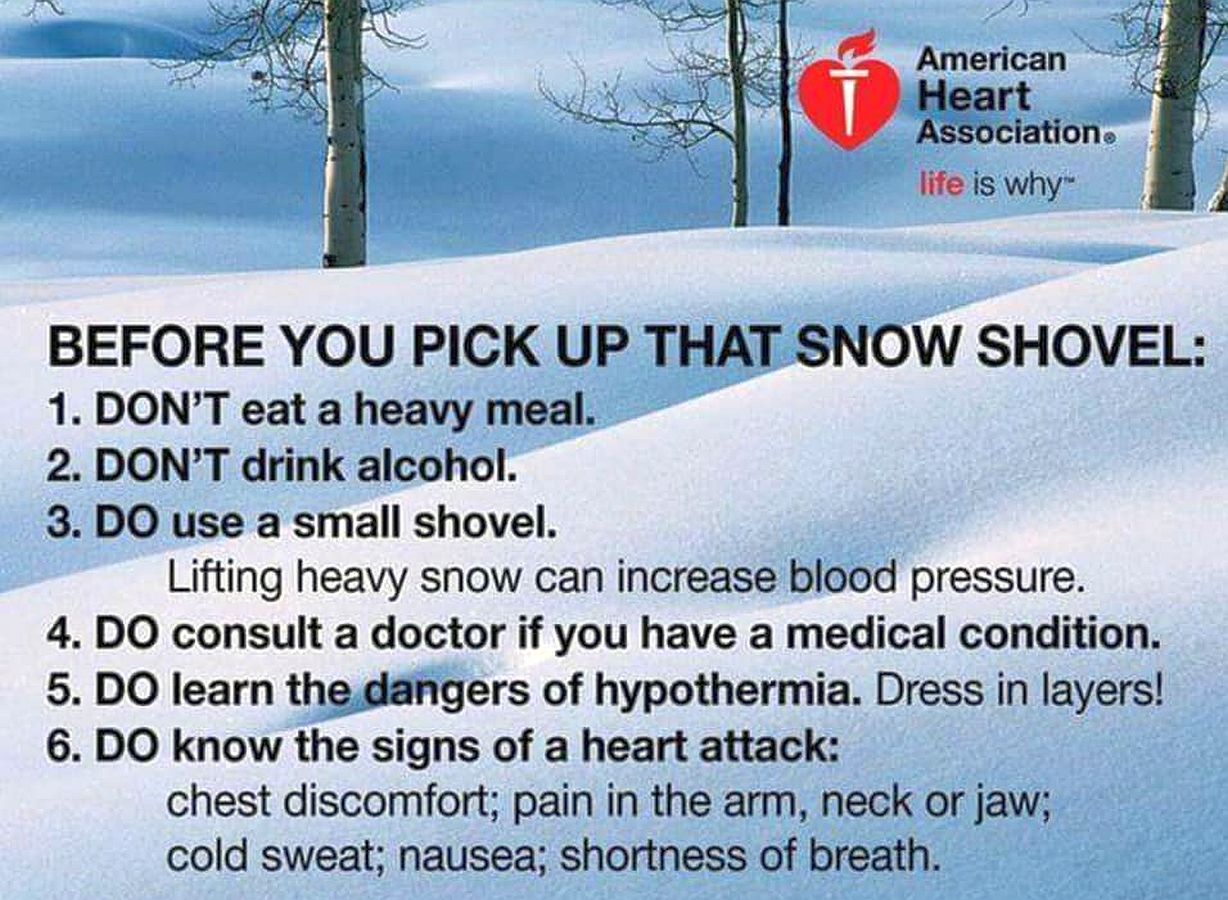 With a blast of snow and arctic air forecast for much of Indiana later this week, the American Heart Association, the world’s leading nonprofit organization focused on heart and brain health for all, urges caution when picking up that shovel or even starting the snowblower. Research shows that many people may face an increased risk of a heart attack or sudden cardiac arrest after shoveling heavy snow.

The American Heart Association’s 2020 scientific statement, Exercise-Related Acute Cardiovascular Events and Potential Deleterious Adaptations Following Long-Term Exercise Training: Placing the Risks Into Perspective–An Update, notes snow shoveling among the physical activities that may place extra stress on the heart, especially among people who aren’t used to regular exercise. Numerous scientific research studies over the years have identified the dangers of shoveling snow for people with and without previously known heart disease.

“Shoveling a little snow off your sidewalk may not seem like hard work. However, the strain of heavy snow shoveling may be as or even more demanding on the heart than taking a treadmill stress test, according to research results.” said Dr. William Gill, a cardiologist on the American Heart Association’s Indianapolis board of directors. “After only two minutes of snow shoveling, study participants’ heart rates exceeded 85% of maximal heart rate, which is a level more commonly expected during intense aerobic exercise testing. The impact is hardest on those people who are least fit.”

A study conducted in Canada a few years ago found that the chance of heart attack after a snowfall increased among men but not among women. The study found that, compared to no snowfall, a heavy snow – about 7-8 inches – was associated with 16% higher odds of men being admitted to the hospital with a heart attack, and a 34% increase in the chance of men dying from a heart attack.

Gill noted that winter weather in general can contribute to the increased risk and compared shoveling snow to working out in a freezer. Cold temperatures may increase blood pressure while simultaneously constricting the coronary arteries. Those factors, combined with the higher heart rate from the extra physical effort, may increase the risk for acute cardiac events. There are even studies that show an increased risk for heart attacks among people using automatic snow blowers. Similar to the extra exertion of pushing shovel, pushing a snow blower can raise heart rate and blood pressure quickly.

“The impact of snow removal is especially concerning for people who already have cardiovascular risks like a sedentary lifestyle or obesity, being a current or former smoker, having diabetes, high cholesterol or high blood pressure, as well as people who have had a heart attack or stroke,” Gill said. “People with these characteristics and those who have had bypass surgery or coronary angioplasty simply should not be shoveling snow.”

Gill said the most important thing is to be aware of the dangers, be prepared and take it easy, including taking short breaks. Even people who are relatively healthy should note that pushing the snow with a shovel is better physically than lifting and throwing it.

The American Heart Association urges everyone to learn the common signs of heart trouble and if you experience chest pain or pressure, lightheadedness or heart palpitations or irregular heart rhythms, stop the activity immediately. Call 9-1-1 if symptoms don’t subside shortly after you stop shoveling or snow blowing. If you see someone collapse while shoveling snow, call for help and start Hands-Only CPR if they are unresponsive with no pulse.