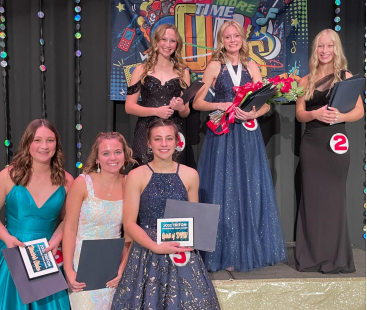 On Saturday, October 8, six young ladies vied for $5,000 in college scholarships and the
opportunity to represent the community as the 59th Distinguished Young Woman of Triton. The Triton
Performing Arts Center was decked out in millennium themed decorations for the 2023 program whose
participants, in order of competition number, were:

Kinsey Atkins is the daughter of Kevin and Krista Atkins of Warsaw. Kinseyis finalizing her career and post-secondary plans but is interested in the biomedical field.

Lilee Stetzel is the daughter of Jared and Kimberly Stetzel of Bourbon. Lilee plans to attend Huntington or Bethel University with the goal of becoming a children’s therapist or minister.

Olivia Shively is the daughter of Travis and Amanda Shively of Tippecanoe. Olivia plans to study education at Grace College and become a pre-k or kindergarten teacher.

Emily Jones is the daughter of Jeff and Jennifer Jones. Emily currently resides in Bourbon and plans to attend a Junior College or Vocational School to study dental hygiene or become a medical examiner.

Kaitlyn Jackson is the daughter of Brian and Stacy Jackson of Bourbon. Kaitlyn plans to attend Purdue University with the goal of becoming a veterinarian.

The six young women were evaluated by a panel of five judges in the following categories: Scholastics (25%), Interview (25%), Talent (20%), Fitness (15%), and Self-Expression (15%). Triton’s reigning Distinguished Young Woman, Hanna Hooley, announced Anna McIntyre as the winner of the 2023 title. Triton’s 2015 DYW, Kylie (Mason) Hollar, presented McIntyre with a $1,200 scholarship (sponsored in full by the Breanna Lemler Memorial Scholarship Fund), the DYW medallion, and a plaque commemorating the 59th winner of Triton’s Distinguished Young Women program. Anna will join other senior girls from across the state the week of February 12, 2023 to vie for the title of Indiana’s 2023 Distinguished Young Woman.