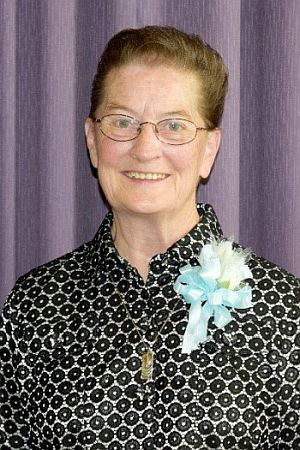 Sister Mary Carolyn Welhoelter, Poor Handmaid of Jesus Christ, died on September 21, 2022 at Catherine Kasper Home, Donaldson, IN surrounded by her Sisters and friends.
As the second eldest of seven children of Hank and Imogene Welhoelter, Sr. Mary Carolyn was born in St. Louis, MO, and was known to most as a die-hard St. Louis Cardinals fan. Her parents, brother Paul, her nephew, Sean., sister, Maggie Mercier, and her brother-in-law, Adrian Mercier, all preceded her in death. She is survived by her sisters, Marilyn Jean Taylor, Martha Meyer, and Madelyn Kinnan, her brother Bob Welhoelter, and brothers- law Ed Taylor, Paul Meyer, and Dave Kinnan as well as numerous nieces, nephews and great nieces.
Sr. Mary Carolyn entered the Poor Handmaids of Jesus Christ on August 8, 1962 taking the name of Sr. DePaul for many years.  She professed vows on August 6, 1965.
With a focus on childcare, parish ministry, and a keen sense of justice for those most unfortunate, Sr. Mary Carolyn served in a variety of assignments that included the following:
Angel Guardian Orphanage (1965-1968), St. Vincent Villa (1968-1971), Ancilla Domini High School (1971-1974), Project Renewal in Davenport, IA (1974-1975), Ancilla Domini Convent, Milwaukee, WI (1975-1981), St. Mary Convent, East St. Louis (1981-1982), St. Boniface Convent, Edwardsville, IL (1982-1997), Mary Katherine Convent, Cairo, IL (1997-2016), and Catherine Kasper Home, Donaldson, IN (2016-2022). Sr. Mary Carolyn made friends easily and offered her creative energy, humor, and love for life at each of her ministries.
While rehabbing a house in Davenport, IA, she received a surprise guest, Saint Mother Theresa who was there locally for a speaking engagement. Another highlight of Sr. Mary Carolyn’s life was a service trip to Thailand in 1981, where she served in a relocation camp for Cambodian families displaced by Khmer Rouge. Each of her ministries provided her with great friendships, laughs and memories. Sr. Mary Carolyn will be remembered for her love of friends, life and those most in need.
Wake and funeral Wednesday, September 28, 2022 at Ancilla Domini Chapel, Donaldson, Indiana, 9601 Union Rd., Plymouth, IN 46563 will be held from 9:30-11:00 am (EST). The Mass of Resurrection will be celebrated at 11:00 am.
Burial will take place in the Mt. Carmel Cemetery, Donaldson.
For those unable to attend in person, the Mass of Christian Burial will be livestreamed at www.poorhandmaids.org/live
Memorial contributions to the Poor Handmaids of Jesus Christ, P.O. Box #1, Donaldson, IN 46513 or on www.poorhandmaids.org<http://www.poorhandmaids.org>