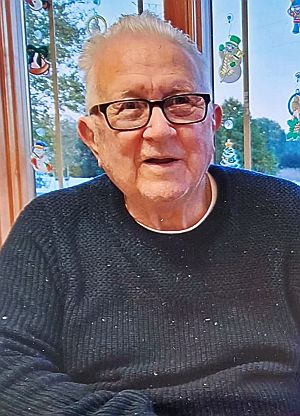 Colonel Cramer was born to Ben George and Norma (Dunfee) Cramer on November 7, 1934 in Plymouth, IN. He married Mary Whitesell on May 28, 1960 in Plymouth, IN. He graduated from Plymouth High School and continued his education to receive an undergraduate degree from the University of Nebraska, and then a master’s degree. He worked at Stockman’s Refrigeration, as a mail carrier with the Post Office before enlisting in the United States Army. He was active duty for 2 years, with 8 basic tours during which he rewrote regulations and procedures and ran an emergency center for President Eisenhour. He extended his term and went on his first tour to Vietnam where he was building houses, training, giving haircuts, helping with boxes for the local military, supported as an honored guest, using the helicopter and artillery areas. He was selected for a career course and became an advisor to the NC National Guard in the round out Battalion. He started a second tour of Vietnam and one year of language training where he helped medical teams for villages, grinding rice, making rice oil, and loading trucks. He went on a Squak mission (400 hours) to visit Vietnam headquarters and brief the General. He also went to Saigon. He went on to a European tour and visited every country, the Vatican, the coast, Florence (Straw Market), Venice (St. Mark’s Square). He enjoyed Volksmarching, skiing, collecting Hummels and other art. He visited England, Scotland, and Wales. He met his pen pal, Alan Camsell whom he knew since he was 11 years old. He taught hydraulics to Lieutenants, upper officers, and Senior NCOs. He also played racquetball, both singles and doubles. He retired after 26 years from the United States Army to Tulsa, OK and ran a 9-miler race. He began powerlifting and became a World Champion as well as an international referee in England.

Colonel Cramer is survived by his wife, Mary Cramer of Plymouth, IN, and his daughter, Jane Cramer of Thornton, CO; and his little grand-dog, Emmy.

Colonel Cramer is preceded in death by his son, Ned Allen Cramer II; his parents, Ben and Norma Cramer; his sister, Betty Jane Cramer; and his brother, Jay M. Cramer.

A private graveside service will be held at New Oak Hill Cemetery.

The family would like to give special thanks to Kim Mollette, Shacoda Betz, Melanie Dove, Lori Fawcett, Joey Balsley, and Darlene Brundige.

Deaton-Clemens Van Gilder Funeral Home is honored to be providing the services in celebrating the life of Colonel Cramer and wish to express our deepest condolences to the Cramer family.

Friends are invited to sign the online guest book and share memories with the family at: www.deatonclemensfh.com