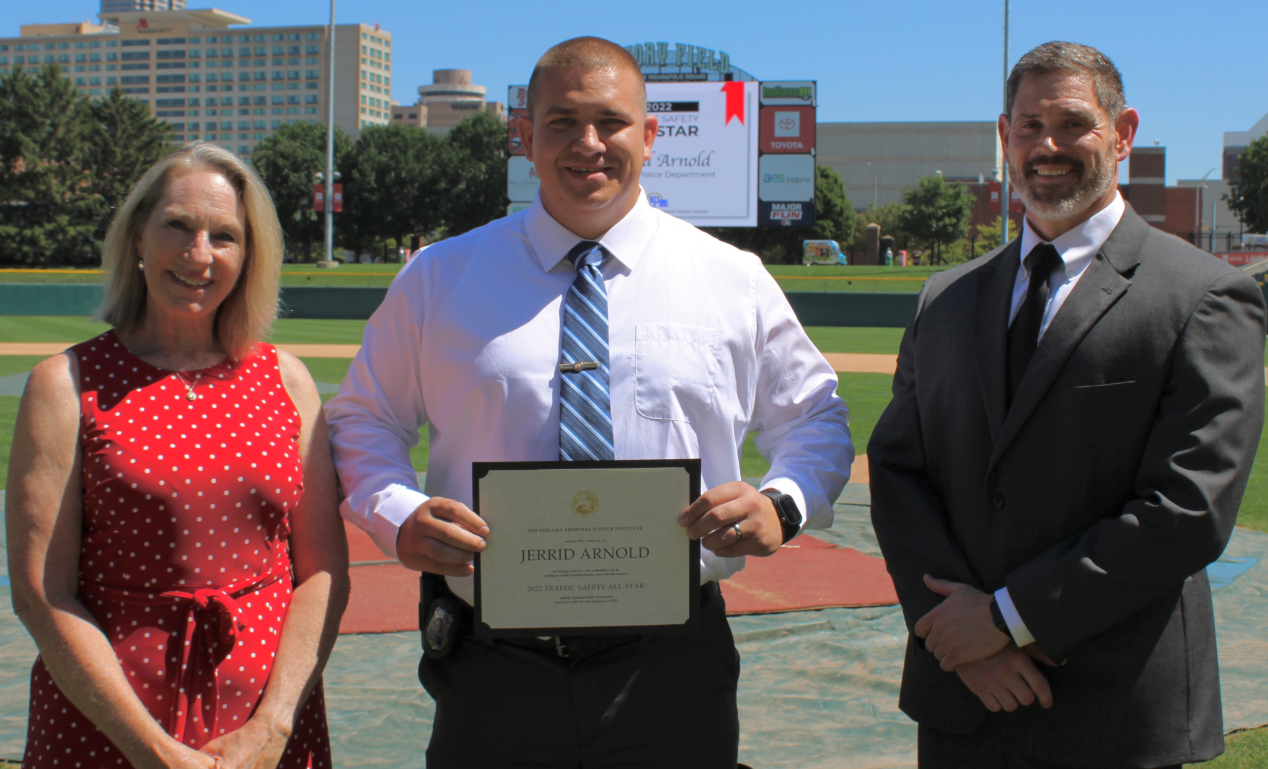 Wednesday, the Indiana Criminal Justice Institute (ICJI) presented 62 police officers with the Traffic Safety All-Star Award for their efforts in impaired driving enforcement. To qualify for the award, an officer must have made at least 20 operating while intoxicated arrests and participated in one of the state’s enhanced enforcement campaigns in the previous year.

The all-stars, who were nominated by their departments, were recognized during a ceremony held at Victory Field in Indianapolis.

Officer Jerrid Arnold with the Plymouth Police Department and Trooper Benjamin Beers with the ISP Bremen Post were the only two Marshall County police officers to be recognized.

Devon McDonald, ICJI Executive Director said during the event, “Every time an officer makes a stop for drunk or drug-impaired driving, they potentially save a life. Our roads and communities are safer, and people are alive today, thanks to the actions of these brave men and women. It was an honor to recognize their efforts.”

Now in its third year, the Traffic Safety All-Star awards program was created by ICJI as a way to recognize police officers who are going and beyond in the fight against impaired driving.

Each officer demonstrated this by, not only working to educate motorists about the importance of safe driving, but also working overtime to enforce Indiana’s traffic laws. This often meant conducting extra high visibility patrols or sobriety checkpoints during peak travel periods and holidays associated with drinking.

In total, the officers who were recognized made nearly 3,000 operating while intoxicated arrests last year. Despite their efforts, still, approximately 1 out of 4 fatal crashes in Indiana involve a drunk driver.

“These all-stars are stepping up to the plate to tackle the issue of impaired driving,” said Robert Duckworth, ICJI Traffic Safety Director. “Their goal—the motivation behind what they do—is to prevent crashes and save lives, and with fatalities on the rise, their work is needed now more than ever.”

During the ceremony, the top performers, or MVPs, were recognized with a special Traffic Safety All-Star Award, Golden Glove distinction. In addition, ICJI also presented a separate Leadership Award for outstanding contributions, outside of traffic enforcement, in the prevention of impaired driving.

As part of the program, ICJI also sought to highlight the importance of high-visibility enforcement, as well as encourage drivers to do their part by always planning ahead for a safe ride home.

Impaired driving remains one of the deadliest, yet preventable, dangers on the road today. Even if only one drink is consumed, designate a sober driver or use public transportation or a ride service. Never drive under the influence of drugs or alcohol or let friends get behind the wheel if they’re impaired.