Monticello Man Injured When Tree Falls on his Vehicle 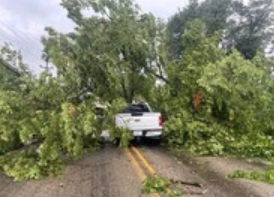 Yesterday at approximately 4:13 p.m., officers from the Indiana State Police and the Fulton County Sheriff’s Department responded to a single-vehicle crash at 9592 S. State Road 25, in which a Monticello, IN man, was injured.

The preliminary crash investigation by Trooper Dustin Rutledge revealed that Hunter Smolek, 22, Monticello, IN was driving a 2021 Ford F150 Supercrew pickup truck southbound on State Road 25 near 9592 South, when a tree from the west side of the road fell on top of the Ford, trapping Smolek.

Firefighters from the Twelve Mile and Liberty Township fire departments had to extricate Smolek, who was transported in critical condition to a Lafayette hospital. At last check, he was talking and alert.

At the time of the crash, there was a storm with heavy winds passing through the area.

The Indiana Department of Transportation utilized a payloader to remove the tree from State Road 25 which was closed for approximately two and a half hours.