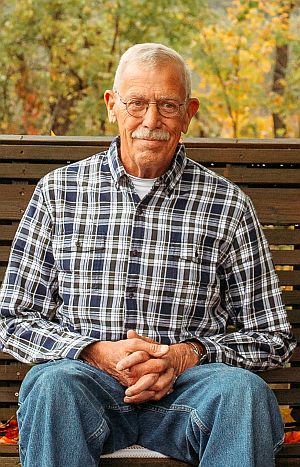 Bruce A. Emerick passed away May 10, 2022, at the age of 69 in his hometown of Plymouth, Indiana.  His long and courageous battle with serious medical issues in recent years demonstrated his enduring strength, grit, determination and compassion.
Growing up the oldest of three boys in Kendallville, Indiana, Bruce spent his free time racing dirt bikes and rehabbing vintage cars.  He had a basement full of trophies from his many successful bike races.  Bruce proudly served his country in the U.S. Army during the final years of the Vietnam War as a track wheeled mechanic serving as a Specialist 4 with the 1st Armored Division, 6th Infantry.  After being honorably discharged, Bruce obtained a tech degree from ITT Fort Wayne.
Bruce met his soulmate Chris on a blind date and they were married in Avilla, Indiana, after a short courtship.  He passed away a few weeks before their 46th anniversary.  Bruce and Chris have two children and raised their family in the Argos/Plymouth area.
Following his time in the Army, Bruce accepted a position with United Telephone Company where he remained, through several acquisitions and name changes, for 39 ½ years before retiring.  Bruce believed in giving back to his community.  He was a twenty-eight-year active member of the Argos Lions Club and served in a variety of officer positions for the organization, including president.  Bruce also put his handyman skills to use with Habitat for Humanity of Marshall County where he assisted with and supervised the building of many homes in addition to serving as a board member.
Bruce is survived by his wife Chris, son Tim (Jenny), daughter Jodie, grandchildren Bryce and Ashlyn, brothers Earl (Nancy) and Brent (Dolly), brothers-in-law Mike (Sara) Ley, Jim Ley, Steve (Shar) Ley, Pat (Cathy) Ley, sisters-in-law Denise (Jerry) Fanger, Laura Rudd, Sharon (Mike) Kacprowicz, Nancy (Tom) Reinhardt, and many nieces and nephews.
He was preceded in death by his parents Deke and Joanne, his mother-in-law and father-in-law Victor and Ursula Ley, and brother-in-law Ken Rudd.
In his later years, Bruce’s best times were spent with his family, particularly his grandchildren.  Together they were able to accomplish the items on his bucket list and make many lasting memories.
Visitation will be held on Thursday, May 19, 2022 from 3-7 pm at the Johnson-Danielson Funeral Home, 1100 N. Michigan Street, Plymouth, IN 46563.
A Memorial Service will be held on Friday, May 20, 2022 at 11:30 am at the funeral home with Chaplain Wyatt Smith officiating. Military honors will be rendered with the U.S. Army Honor Guard.
A private internment will held at a later date.
Memorial contributions can be made to the Marshall County Habitat for Humanity, 116 S Walnut St, Plymouth, IN 46563, the American Cancer Society, 5635 W 96th St Suite 100, Indianapolis, IN 46278 or to the choice of the donor.
Bruce’s family would like to thank their many friends and family for the love and support they have shown, particularly during Bruce’s medical battles.  We are very blessed.
Condolences may be sent to the family through the website:  www.johnson-danielson.com<http://www.johnson-danielson.com>.