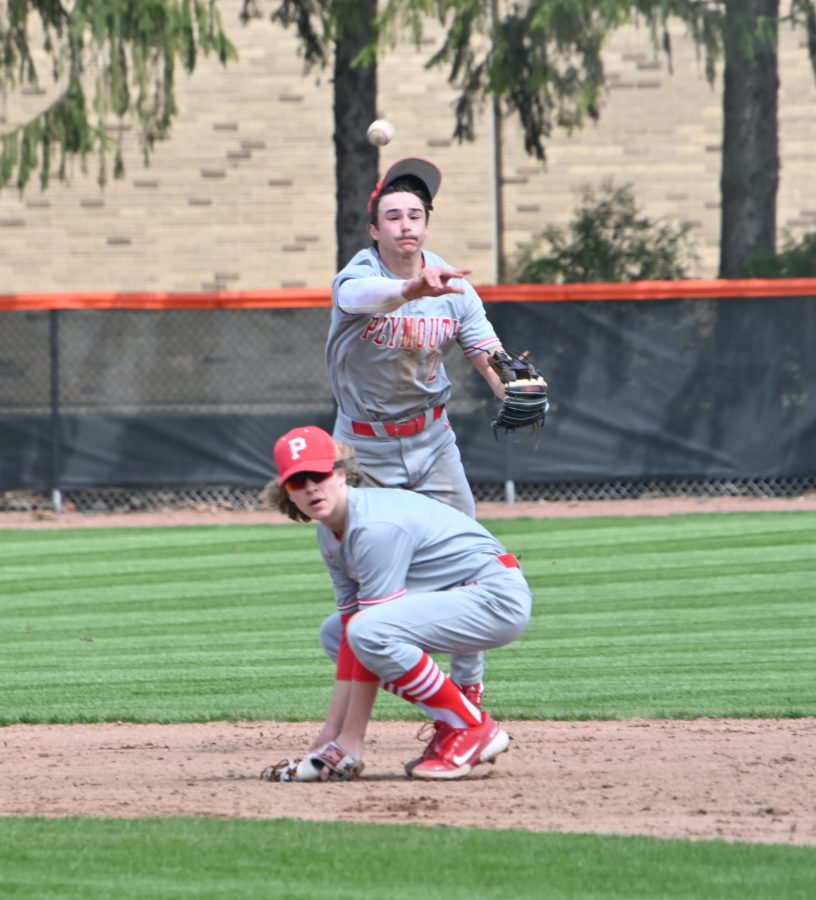 LaPORTE — What was shaping up as a great high school baseball battle turned into a route as No. 8 (4A) LaPorte rode 11 runs in a nightmare fourth inning to a five-inning 14-4 win.
Plymouth was sailing with a three-run lead in the fourth inning. Starter Noble Bockman had given up just three hits, striking out four in that span but then the wheels literally came completely off with two outs as LaPorte sent 15 hitters to the plate gathered 11 hits, and plated 11 runs in an inning that could just as easily ended with Plymouth holding their lead.
“That was kind of who we were last year, we couldn’t get out of an inning,” said Plymouth head coach Ryan Wolfe. “We’ve been very good at not having stuff like that happen. You’re bound to have those in baseball, it is what it is, but you have to find a way to make a play behind your pitcher.”
“Early they gave us an out and we couldn’t field a bunt and it snowballed,” he said. “That’s on me. I probably didn’t communicate well enough but there were a lot of things that happened in that inning and we didn’t take advantage.”
While the final line doesn’t show it Bockman had command of the first three and two-thirds giving the Pilgrims a chance.
“Bock pitched well early on and we thought that the second time through the order they might get to him some and we’d go to somebody else but I thought he pitched well,” said Wolfe.
At the plate, it was much the same.
Plymouth came out and struck quickly in the first putting the Slicers back on their heels with Cam Shively stroking a single to lead off the game and Tanner Feece driving him with a double two batters later.
Inning two was more of the same with Caden Weidner drawing a two-out walk, moving to third on Preston Wolfe’s single, and scoring on a passed ball.
In the third Feece blasted a homer to left-center and in the fourth Shively singled home Matt Manzuk and Plymouth had a 4-1 lead.
“We had a lot of contact, executed the hit and run, all the things that we’ve been doing,” said Wolfe. “We are 11 games in and we aren’t the team that you saw in that inning, we are the team that’s played well all year. We have to shore some things up and keep doing what we’ve been doing and be sure something like this doesn’t happen to us again.”
Plymouth is 6-4 on the season and will be at home against Goshen Monday night. LaPorte is now 9-2 on the season.
•LaPORTE 14, PLYMOUTH 4
at LaPorte
Plymouth 1 1 1 1 0 4-8-3
LaPorte 0 0 1 11 2 14-16-1
WP — Lowe. LP — Bockman (1-1). HR — Feece (P). 2B — Feece (P), Pittman (P), Flores (L), Worthington (L), Anglin (L), Moses (L).