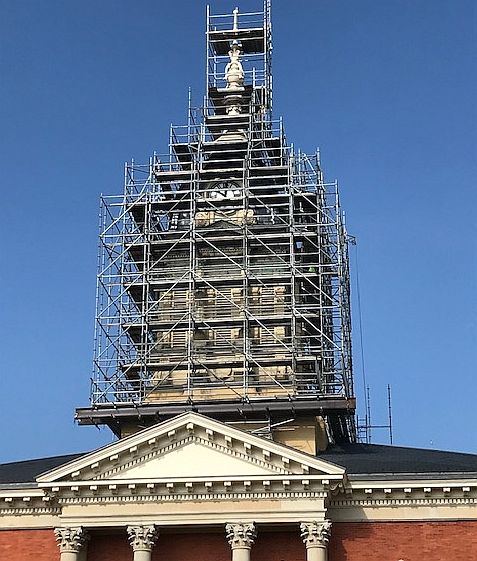 Midwest Maintenance is working on the Court House Clock Tower again.   After removing the planks from the scaffolding in November employees of Midwest were back on the job last week preparing the scaffolding for the remaining restoration work.

Project Manager Jamie Giguere and Foreman Jerry Hazeltine told the commissioners they are starting to build the scaffolding up and will be ready to start removing some of the wood on the clock tower next week.  Giguere said they are still working toward a July completion date with no issues.  He said there were a lot of issues over the wintertime trying to get the Accoya wood that is harvested in New Zealand.  It is warranted for 50 years. Giguere said it was all shipped and arrived and Stull Woodworks in Troy, Ohio has been working on cutting the wood to specification.

The only thing that isn’t built year is the columns.  Giguere said they are going to take one down and take it back to the shop to use as a pattern.

Commissioners Overmyer asked about the new architect which he said was a surprise.

Giguere said, “Everything is running smoothly even with the transition of switching architects in the middle of a project. There have been no issues at all.”

County Attorney Jim Clevenger told the commissioners he got wind of the project starting again on Friday and stopped by all four courts and warned the four judges that they should expect some noise in the next few weeks.