Pilgrims heat up the bats in cold opening day win 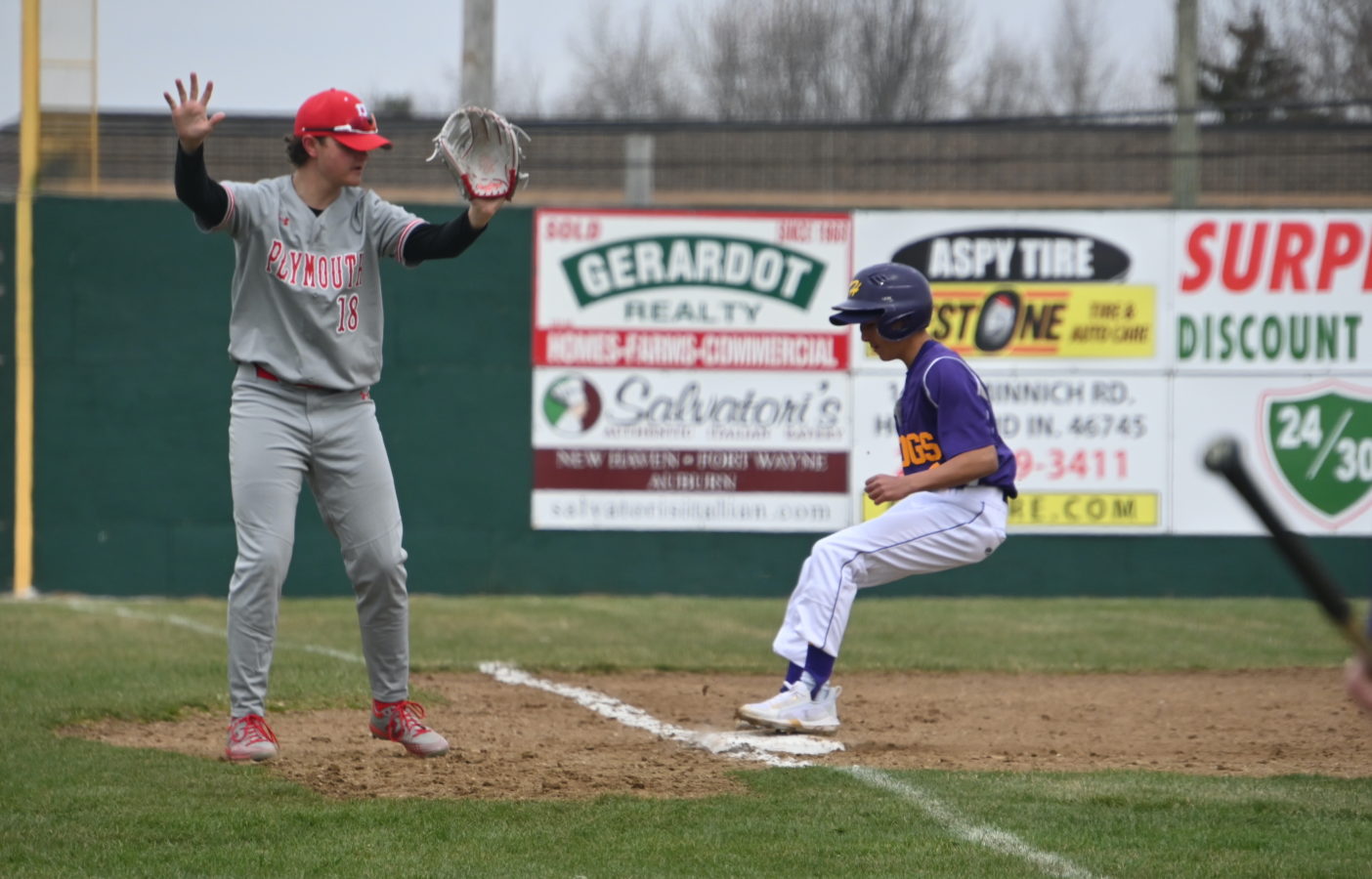 NEW HAVEN — It was a cold way to open a baseball season but Plymouth’s Pilgrims took advantage of the lack of snow to get their opening game in at New Haven Saturday and came away with a convincing 20-0 win over the Bulldogs.
Plymouth grabbed a 7-0 lead in their first time at the plate and never let off the throttle to grab the opener for 2022.
“It was good just seeing some different arms,” said Plymouth coach Ryan Wolfe. “Getting some at-bats getting outside we were definitely ready for that.”
If the first inning at the plate was any indication the Pilgrims were indeed “ready” for that.
Plymouth put their first three runners on base and a sacrifice fly by Tanner Feece plated the first Plymouth run. The big blow in the inning was a two-out, two-run single by starting first baseman Boston Berkeypile, who would add an RBI double in his next at-bat.
“We have an older team and we kind of expected that,” said Wolfe. “We expected to come out here and throw strikes. We really just wanted to see some bats on the ball. Get some live fly balls and ground balls — something other than a pitching machine.”
“We really haven’t seen many live arms. The first week we did a little bit but the arms weren’t ready,” he said. “This past week has been so cold that we haven’t been outside.”
“These guys have a great baseball sense. We kind of knew that coming out but it was nice to see it all put together for a complete game and these guys did well today.”
There were plenty of kudos to hand around at the plate with Cam Shively having a nearly perfect day with a 3 for 3 that included a pair of doubles, three RBIs, and three runs scored out of the leadoff slot.
Skyler Aker had a pair of hits and three RBIs, and Michael Sheely and Preston Wolfe each doubled.
On the mound the Pilgrims were just as impressive with three pitchers — Aker, Feece, and Matt Manzuk — combining on the shutout one-hitter.
Manzuk struck out two of the three batters he faced in the fifth, Feece had three K’s. Combined the three surrendered just two walks.
“I think that we’re a little bit ahead at the plate because we have a lot of older guys,” said Wolfe. “We have guys that played all last year and we kind of know what to expect. I think on the mound we know what to expect it’s just a matter of continuing to build up and get stronger. We have guys coming off winter seasons who haven’t thrown a lot.”
“Really in all facets of the game we are where we should be at this point, and we will continue to build as we get closer to NLC.”
Plymouth will be back in action on Wednesday at Bill Nixon Field for their home opener against South Bend St. Joe. Game time is 5:30 p.m.
•PLYMOUTH 20, NEW HAVEN 0
at New Haven
Plymouth 7 1 4 5 3 20-13-7
New Haven 0 0 0 0 0 0-1-5
WP — Feece. LP — Mason Knoch. 3B — Aker (P). 2B — Shively 2 (P), Feece (P), Sheely (P), Berkeypile (P), Wolfe (P).