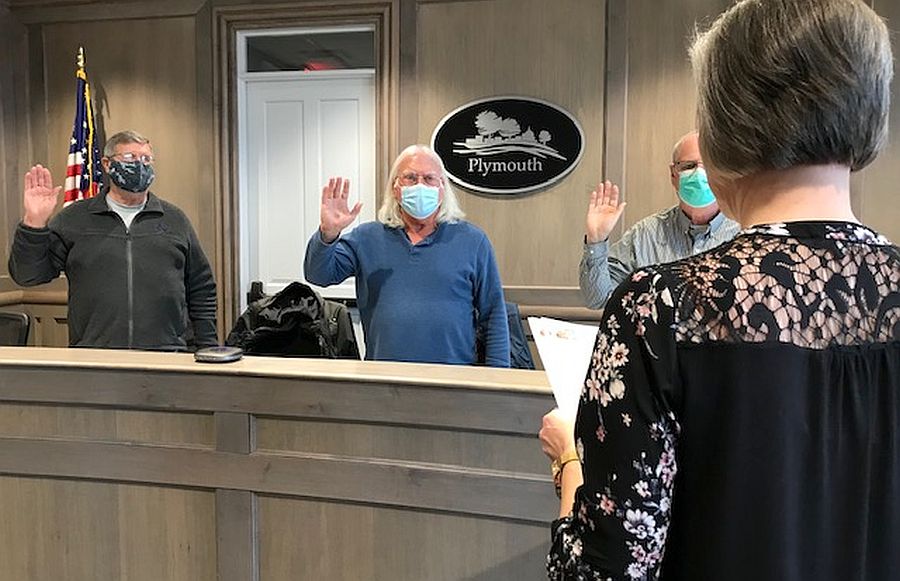 The Plymouth Redevelopment Commission met Tuesday evening in the Council Chambers of City Hall.  The first order of business was to administer the Oath of Office to the members present, including: Mike Miley, Billy Ellinger, Tom Pedavoli and Craig Hopple.

Members were then updated on the various activities in the TIF Districts by City Attorney Sean Surrisi.

In TIF #1 (US30/ Oak Road) the Hoham Drive Project is on schedule for the July letting.  On Wednesday there was a Utility Coordination meeting for the project at the Street Department.  The meeting was to work through any remaining issues with utilities that need to be moved for the project.

In TIF #2 (East Jefferson/Central Business District) the City Attorney brought up the River Park Square additional funding request for the project.  Abby Collins from the Park Department has sent a request explaining where the project was at and Mike Reese from the Troyer Group communicated to the Redevelopment Commission his concerns on funding.  One of his concerns was the $45,000 that will be payable to Priority Project Resources for their services in administering the OCRA grant when the project is completed.

Low bidder for the project was LaPorte Construction with a base bid of $761,000 and a bid of $47,000 for the Sensory Garden alternate and $50,000 for the fieldstone work on the pavilion.

Superintendent Mike Hite and Maintenance Director Dave Cooper were concerned with the DNR planning restrictions as well as maintenance concerns for the Sensory Garden and felt it was something they could work on after the project was completed.

Mike Reese from the Troyer Group also commented that there were no contingency funds for the project.  If something unexpected was to come up the park would have to come to the Redevelopment Commission for the extra funds slowing the project down.

After a discussion the Plymouth Redevelopment Commission learned of the urgency to move forward because bids were opened the second week of January, and they are only good for 60 days.  Members reviewed TIF #2’s budget and felt there were funds available for additional funding. They approved $150,000 towards phase II plans for River Park Square.