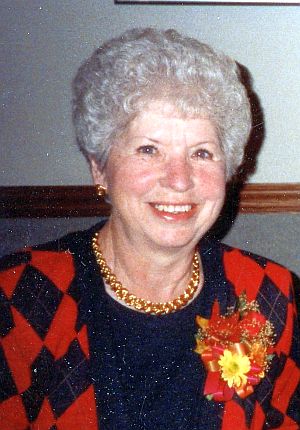 LaEuna C. Zumbaugh, 97, went home to be with her Lord and Savior on Saturday, December 11, 2021 at her son’s home.
A lifetime Marshall County resident, she was born on November 1, 1924 in Teegarden, Indiana she was the daughter of Millard and Grace (Aldrich) Lemert.
She attended Tyner High School graduating with the class of 1942. On October 22, 1944 she married Dale in Koontz Lake, he preceded her in death on February 24, 1997. LaEuna worked for JC Penny’s for 29 years before her retirement in 1988.
LaEuna had a tremendous work ethic, going from JC Penny’s to Lemert’s Fruit Farm to picking fruit and tending to her beautiful flower garden. She cared more about everyone else’s well being before her own, cooking wonderful Sunday dinners for the family and their minister.
She was a faithful servant in so many ways, but most importantly a faithful servant to God.
She is survived by her son Leland (Ann) Zumbaugh of Culver; daughter-in-law Loretta Zumbaugh of Lakeville; granddaughters: Tari Clidence of Lithopolis, OH; Erin Schoberg of Culver; 3 great-granddaughters: Whitney, Lauren and Macy; as well as several nieces and nephews.
LaEuna is preceded in death by her parents, husband, son David and her siblings Charles and LaVerne.
A private graveside service will take place at a later date.
Memorial contributions can be made to Teegarden First Brethren Church, 16518 West 1st Road, Walkerton, IN 46574.
Condolences may be sent to the family through the website:  www.johnson-danielson.com<http://www.johnson-danielson.com>