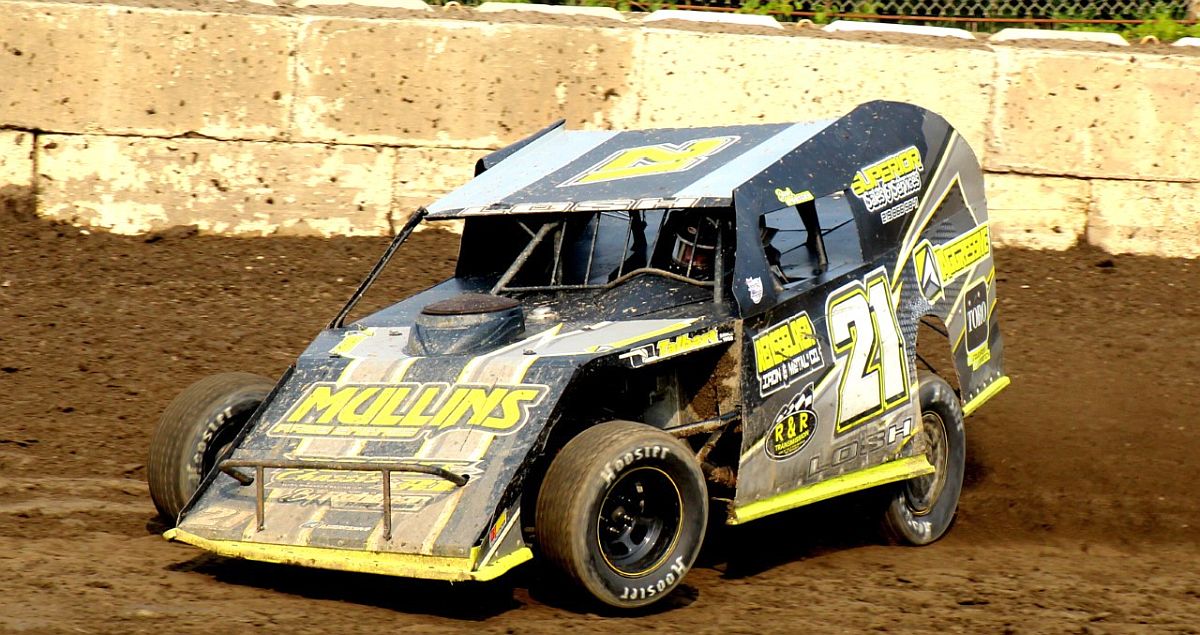 There is one more week until the points season draws to a close at Plymouth Motor Speedway so drivers are up on the wheel to give it all they have until the checkered flag flies on championship night.

The UMP Modified drivers had a lot going on at the front of the lineup as 25 laps kept fans guessing who would take home the first place trophy.  Frank Marshall (Valparaiso, Indiana) looked as if he was going to dominate the race, but Zeke McKenzie (Claypool, Indiana), Bradley Jameson (Royal Center, Indiana) and Derek Losh (Rensselaer, Indiana) battled him for the lead at some point during the 25-lap feature.  Jameson had a good run early, but could not hold back a charging McKenzie.  McKenzie got by Jameson on lap 6 and held the second spot for quite a few laps until he took the lead from Marshall on lap 13.  Marshall was not deterred as he worked to get the lead back from McKenzie after a couple of laps.  In the meantime, Losh used the high banks of the racetrack to move his way through his competitors.  He took the top spot from Marshall on lap 22 and finished the race as the winner.  Marshall was second and McKenzie finished third.  There was a lot of side-by-side driving in the feature for position which kept all eyes on the track.

The Thunder Stock Feature found Lee Hall (Oxford, Indiana) as the dominant car.  Jacob Kolwyck (Griffith, Indiana) and David Hurst (Lafayette, Indiana) were working for the same spot on the racetrack for the first part of the feature.  Hurst was able to settle in for second and Kolwyck in third.  Hurst was side-by-side Hall at the start/finish line for the lead on lap 11, but Hall was able to keep his No. 90 machine at the top of the running order in the 20-lap Feature. Hurst and Kolwyck traded positions several times after restarts, but Hurst finished behind Hall for second while Kolwyck rounded out the top three on the podium.

The 600 Non-Wing Sprints event found last week’s second place finisher up another spot in the lineup.  Trey Johnson (Warsaw, Indiana) got by pole-sitter Chad Hartzell on lap 5 and found some competition with Ed Cleveland (Plymouth, Indiana) halfway through the feature.  Cleveland started 12th in the feature and made his way into the top two by lap 10.  Braxton Hanft (Warsaw, Indiana) had raced to the third position at the beginning of the race and had to try to fend off Cleveland as he charged to the second position.  The three had a good lead from the field as the caution-filled feature drew to the last few laps.  It was Johnson with the win, Cleveland with second and Hanft in third.

“That was tiring,” Johnson said after climbing from the car on a muggy Indiana summer night.  “The track was super fast and Ed and Braxton ran a clean race.  It was a great show.”

The Front Wheel Drive competitors closed out the night with some drama at the lead of the pack.  Josh Lank, Jr. was leading for the first seven laps before experiencing a tire issue.  A caution came out for the flat right rear tire of his car and he headed back to the pits to put on a new tire.  He was able to return to the race, but at the rear of the lead lap cars.  Josh Gamblin (Kokomo, Indiana) assumed the lead with Adam Tatman and Josh Lank in the top three positions.  Pretty soon, the No. 310 of Guy Sutton made his way up in the lineup and was challenging Lank for second position.  He was able to get the spot from Lank on lap 11.  Lank also experienced a flat tire on his car, but he was able to get it fixed during a caution and resumed racing in the third spot.  Lank was not giving up as he and Sutton fought for position by lap 13 and Sutton kept his spot.  They were side-by-side by lap 18 and Lank was able to pass Sutton for second.  Lank was making his way to fight Gamblin for the lead as the laps ticked down, but he got caught up in lapped traffic and finished second.   Gamblin was later disqualified as the race winner, so Lank was declared the winner with Sutton in second and David Gingerich (Plymouth, Indiana) finished third.

The excitement continues next week as it is Season Championship night where drivers of the UMP Modifieds, Super Streets, Thunder Stocks, 600 Non-Wing Sprints, and Front Wheel Drives make one last effort to earn more points in the standings.  Hot laps are at 5:30 p.m. and racing begins at 6:30 p.m. ET.  Tony Stewart’s All Stars 410 Sprints will be at the Playground of Power along with the Thunder Stocks Saturday, August 21, the Kenny Wallace Dirt Racing Experience is August 22, the Crash Fest/Night of Destruction is August 28, and the Monster Truck Throw Down is September 11.  More information on those events can be found at www.plymouthspeedway.net or on Plymouth Motor Speedway’s Facebook or Twitter page.