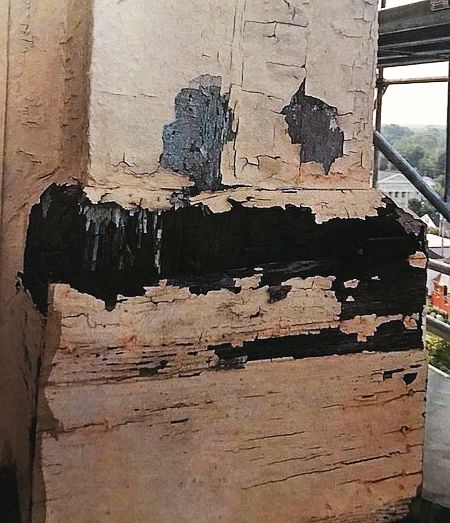 Commissioner Overmyer said. “We were expecting some, but not probably to this degree.  This is what happens when you paint over paint and over paint.  When you remove the paint you see what’s left, if there’s anything left.”

Jerry Hazeltine said, “We started pulling off the band aids and we are starting to find it.  Hopefully we don’t find a whole lot more.”

Commissioner Overmyer asked if the rotten wood was primarily on one side of the clocktower or was it just all around.

Hazeltine said the issue is mainly on the last four levels of the scaffolding.  He said they have a wood specialist coming in on Wednesday to complete a better examination and give an idea on what type of wood is on the clocktower and what it can be replaced with and the extent of the rot.

Pictures provided to the commissioners were for visual reference and showed where a screwdriver was able to be poked right through the wood all the way to the handle.  Jerry said in some areas they patched the rotten wood with metal and or caulk painted over it, but water has been able to get in behind causing more damage.

Commissioner Kevin Overmyer said in discussion last week that it may be possible they will need to replace a lot of the clocktower.  Jerry Hazeltine said maybe as high as 60 to 70 percent of it.

The second issue is the steel I-beam that is under the stairs on the east side of the old courthouse at the basement entrance. It is the header over the basement doors.

While prepping the I-beam for repairs the welder found the bearing beam plate was rotten.  Jerry said he could poke a finger through the steel beam and said, “It’s totally gone.”

The engineer from Rawlings will be in town on Wednesday to look at the I-beam and decide on how it will be repaired.  For safety precautions the entrance has been blocked off.

It was also noted that on the west side of the building there are holes in the wood columns.  While there are issues, they are not all the way around the column which is fortunate although they will need to be rebuilt.

While Midwest didn’t have any figures to give the commissioners during Monday’s meeting it was said, “It doesn’t look good.”

The contract with Midwest Maintenance will probably need an extension past their 180 days with these new issues and the weather they’ve experienced.

Commissioner Mike Burroughs suggested setting up some type of regular maintenance schedule to inspect the clocktower, maybe every 5 years so it doesn’t have the chance to get this bad again.