On Friday October 23rd, Ancilla College renamed three wings in honor of Pioneer Poor Handmaids. For many years, the halls of the college were known as “the Motherhouse Wing”, “the ’66 addition” and “the science/tech wing”, but on that day, a more permanent name was placed on each area.  If you attended Ancilla or are familiar with the layout from a visit, you will know that the Motherhouse hall stops at the bottom of a stairway in the classroom hallway, then leads to the 1966 addition that contains the college reception desk and the administration hallway, which leads to the science and technology classrooms and the “north doors”. Now, they are dedicated to Sisters who laid the foundation for Ancilla College. 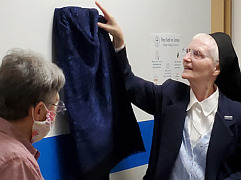 What was “the Motherhouse Wing”, now the Mueller Wing, is dedicated to Sister Symphoria Mueller who was the Director of Education for the Sisters and then became the first Dean of Ancilla Domini College. When the state said that college credits and classes could not be offered across state lines, a thirteen-year arrangement with DePaul University could no longer continue and the Sisters had to decide what to do about educating the Sisters in formation and training them to be teachers, nurses and social workers. The answer was to become accredited and continue the ministry by making Ancilla Domini College an independent two-year institution. Thanks to the work of Sister Symphoria, the Poor Handmaids underwent the process for accreditation and began operating independently from the convent in 1937. Sister Symphoria went on to become Provincial leader of the congregation from 1961-1967, and during her tenure made the decision to construct the first addition to the college. So it is fitting that the Mother House hallway now bears the name of the Mueller Wing in honor of Sister Symphoria.

The addition was completed in 1966, and Sister Joel Lampen was just beginning her tenure as the first president of Ancilla College. Sister Joel would serve in this capacity for 20 years and ushered in many exciting changes for the college. Under her watch, Ancilla saw the first lay students admitted in 1966 and the first co-ed students in 1967, became a degree granting institution with an associate of arts degree, received full-accreditation from the North Central Association, and saw enrollment blossom with the admittance of students from around the area. New programs were added and Sister Joel did an amazing amount of “friend-raising” for the college, bringing awareness to the surrounding area of this hidden gem. What was once referred to as “the ’66 addition” now carries the name Lampen Wing honoring the first president of Ancilla Domini College. 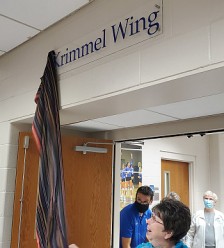 Meanwhile, Sister Maris Krimmel was a person ahead of her time. She grasped the complexities of technology and operated her own ham radio and built not only a telescope but her own computer. She taught for many years, then went on to become a nuclear medical technologist and computerized the medical library at St. Joseph Hospital in Fort Wayne. After retiring to Donaldson, she tutored Ancilla College students on computers, assisted with computer repairs and continued to be a life-long learner until her death at age 101. What was known as the Science/Technology wing is now named the Krimmel Wing in respect to a Sister who pursued interests ahead of her time.

So the next time you find yourself in the halls of Ancilla College, remember the women “whose shoulders we stand upon” as Sr. Michele Dvorak, PHJC stated at the dedication. We are blessed that they had the foresight, wisdom, curiosity and determination to be the foundation of Ancilla Domini College.

Article and photos provided by Ancilla