Car VS Pedestrian Wednesday Afternoon Sends Boy To The Hospital 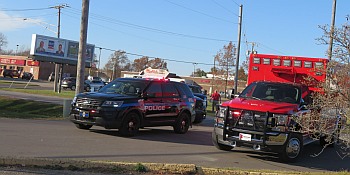 On Wednesday, November 4th at 3:15 P.M. Plymouth Police were dispatched to a car versus pedestrian accident in the area of east Jefferson Street and Kingston Avenue.

Arriving on the scene, Officer Gilbert found the operator of the vehicle to be as Brayden Mackey of Argos was traveling east on east Jefferson Street between Columbus and Kingston when a pedestrian ran in front of his vehicle.

Mr. Mackey applied his breaks but was unable to avoid the collision with the pedestrian.

A witness to the accident was stopped in traffic on Kingston at east Jefferson Street and observed the 11 year old male run southbound across the road into the path of Mr. Mackey.

The pedestrian was transported to St. Joseph Regional Hospital by Plymouth EMS.