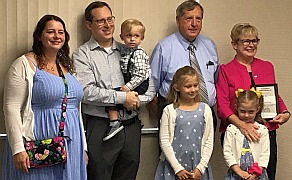 David Bottorff, Director of the Association of Indiana Counties (AIC) was on the agenda of the County Council meeting Monday to present an update since meetings haven’t been held due to COVID-19.

He introduced Therese Brown; an Allen County Commissioners was in attendance to present a special award.  She was there to present the Arthur R. Himsel Award, an award of the Association of Indiana Counties (AIC) that honors an individual for contributing significantly to county government through her/his involvement in the AIC since 1983. The Himsel Award is given in memory of AIC’s founding member Arthur R. Himsel.   The award is given to a current elected official who has served the interest of county government through involvement with the association. 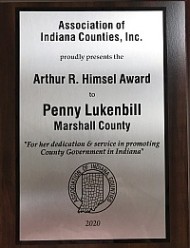 Brown said, “It’s especially an honor to bestow this award, to an individual who has given so much to county government, the community, the AIC and the State of Indiana.”  She listed some of the accomplishments saying, the recipient served as president of the AIC in 2013-14, served on the board from 2005 to 2015 and served on the AIC Legislative Committee for several years.  They served as president of the Association of County Treasurers and was twice elected as Marshall County Treasurer and twice elected as Marshall County Auditor before being elected to the County Council in 2014.  The recipient received the Outstanding Auditor Award in 2012.  Other involvement included the Plymouth Public Library Board of Trustees, Plymouth Park Board and Plymouth Industrial Development board.  The award winner is also involved in the local Lions Club serving a chair person of the Kids Site Vision Screen Project and on December 2nd 2014 was recognized in the Congressional Record at the request of Representative Jackie Walorski.

Commissioner Brown then honored Penny Lukenbill as the 2020 recipient of the Arthur R. Himsel Award.

Lukenbill was surprised at the award and was happy that her family was on hand for the presentation along with many elected county officials.