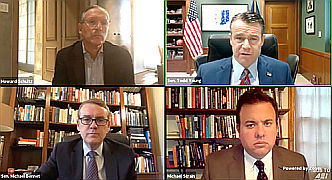 “This is personal for me because I hail from a small business family. I can remember the lean Christmases – we had some good ones, we had some challenging ones – but more than that I remember those many employees that over the years came and went. There are real faces and real names associated with this crisis,” said Senator Young. “So this approach we’ve taken, a low-interest, partially forgivable, longer-term loan where one’s forgiveness is based on one’s revenue loss – I think that this is the right approach… The RESTART Act with 55 cosponsors in the United States Senate is the best opportunity to get this done and I look forward to continuing to work with Michael Bennet, Howard Schultz, and the more than 8,700 small businesses who signed onto this letter.”

Earlier today, Senators Young and Bennet announced that more than 8,700 small business owners and leaders across America have signed on to entrepreneur and philanthropist Howard Schultz’s letter supporting the RESTART Act. Last month, Schultz led more than 100 current and former prominent CEOs on a letter to Congressional leadership expressing support for the type of low-interest, partially forgivable, long-term working capital loan proposed in the RESTART Act. Since then, the letter has gained the support of thousands of small business owners in all 50 states plus the District of Columbia, including at least 55 small businesses in Indiana.