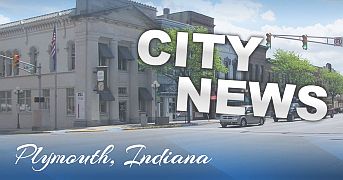 Members of the Plymouth Plan Commission considered the request for a minor subdivision by Linda and George Emenaker and Debra Emenaker during their meeting Tuesday evening.

Plan Consultant Ralph Booker explained that George and Linda’s home sits on one lot on the east side of the 11,000 block of Muckshaw Road.  The farm ground immediately to the north has been in a lot of 62 acres.  A portion of the farm ground will be added to George and Linda’s residential lot and the remaining ground will be for Debra Emenaker.  The property split will be 40 acres and 24 acres.

With no concerns the Plymouth Plan Commission approved the 2 lot minor subdivision.

The second case they had to consider was an amendment to the Planned Unit Development (PUD) of Centennial Crossings.

Burk Richeson, in-house counsel for Construction Management Design (CMD) told members of the Plymouth Plan Commission now that they have selected the 12 single family home floor-plans they need to amend the PUD which initially said all homes would be 40 by 60.   He said the new floor-plans will require several changes although all of the home’s foundations will be at least 18 feet apart.  One of the homes will be 36 by 40 while 3 homes will be 42 by 44 and 8 homes will measure 40 by 46.  The remaining numbers will be 20 homes at 42 by 60 and 26 will be 38 by 60.

The other amendment to the Planned Unit Development is the addition of two large garages for residential use.  One will measure 88 by 24 and the second will be 114 by 24.

During the public hearing Dan and Cindy Milner who live at 12739 Plymouth Goshen Trail, across the street from the new residential development said since all of the trees have been removed, when it rains their driveway is washed out by the runoff.

When asked if they had approached Construction Management Design about the issue they said no.  The engineer for the project attended the meeting and asked to meet with the Milners to solve the problem.

Cindy also asked if there was going to be a phase III of the project that would include property on the west side of the ditch.

Richeson said while there is some ground that could be developed it’s not enough to be feasible due to the fact that a bridge would be needed to cross the ditch.