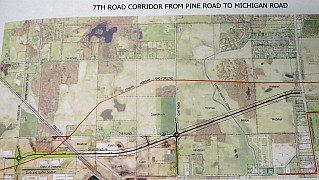 Surrisi said talks between the two governmental agencies have started. He said the project would happen only if both sides are willing to move forward with the $14 million project.

Surrisi told Redevelopment Commission members that the environmental reports were completed during the initial project.  He said they did the environmental all the way to Pioneer Drive but they would need to be updated, although it shouldn’t be a significant cost.