Monday Night Semi Crash At US 30 And Queen Road 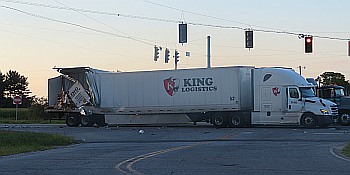 On Monday, August 17th at 7:40 P.M. Marshall County 911 Dispatch Center received a call in reference to a personal injury accident in the area of U.S. 30 and Queen Road in the eastbound lanes. 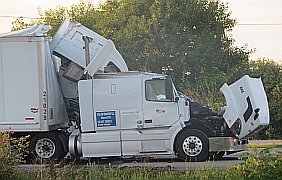 Upon arriving to the scene Sergeant Hollopeter with the Marshall County Sheriff’s Department advised that the crash investigation revealed that Commercial Vehicle #1 identified as a 2014 Volvo Semi, driven by Miron Kadyron of New York was following Commercial Vehicle #2 identified as a 2019 Freightliner driven by Francesca Williams of Mississippi. Both vehicles were traveling east bound on US 30 approached the traffic signal at the Queen Road intersection. 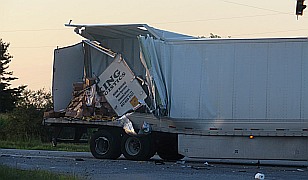 According to witnesses and drivers it was stated that the signal was displaying red for east bound traffic. The Freightliner was stopped at the intersection for the displaying red light when said vehicle was rear ended by the Volvo Semi.
Minor injuries were reported to police and ems on scene.
Plymouth Fire and EMS, Plymouth Police and the Marshall County Sheriff’s Department assisted at the scene.