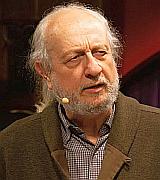 George Schricker brings an energetic, meaning-filled, motivation to this month’s Moonlight program–the live-streamed variety show produced by Wild Rose Moon. As co-host John Bahler jokes, Schricker is, “The man we have to blame for everything.” As the Creative Director of the Moon and a well-traveled storyteller, songwriter, and producer, he brings an acute expertise to the format. At one point, he even beat Bahler to the shot, happily asking, “Do you wanna hear a song?” George enthusiastically reminds viewers who haven’t watched since Aaron Nicely’s episode on July 24th just what Moonlight’s mission is all about: good conversation, intriguing talents, and intelligent insights on the creative process.

The initial episode is filled with a childlike wonderment as George both explains his creative origins and sings two of his songs. During the show he claims to have become a poet around the fourth grade, though admits it didn’t become quite as serious until his college years at Northwestern University in Illinois. One of his most interesting stories is a recounting of his visits as an aspiring songwriter to a cafe called Amazing Grace Coffee House. The joint was filled with folk singer-songwriters (Schricker’s favorite kind) such as Arlo Guthrie, John Prime, Steve Goodman, and many more. A reminiscent sigh and a gleam enlarge his pupils, as he explains these experiences in large-part the creation of Wild Rose Moon.

George’s first song entitled “Leafy,” is a song that could instantly warm the hearts of children and adults alike. While working at Orchard Country Day School, in Indianapolis, George created this  song about a tree with the collaborative help of kindergarten students.

He recounts “Leafy, was a maple tree on the playground that all of the students in the class had adopted, out of the pureness of their hearts. Emulating that innocence in his own voice, Schricker sings, “I wish that you could walk with me upon the forest path.  I wish that you could talk with me and sing and dance and laugh.  I wish that you could hold my hand and run and play and smile. But I know you are a maple tree . . . I’ll probably have to wait a while.” This song serves as a wonderful opening, a Frosty the Snowman for all seasons that brings light and happiness to every listener, no matter the age.

His second song “Turn the World Upside Down” is a beautiful testament to the effortless wisdom that young children seem to possess. Apparently, one day during the Gulf War, George was playing with his son, aged three. Out of nowhere, his young and bright eyed son spoke the couplet that makes up the chorus of the tune, “Turn the world upside down, shake it all around / Let the bombs, and the missiles, and the guns, and the stuff fall out to the floor.”  The song itself plays like an anthem at times––one of peace and a motivated spirit for change within the human psyche. George, remarks, “Children are the closest humans to a kind of “sacred space” that we lose touch with as we grow older.”  As a reflection, Bahler eloquently mused, “A lover of potential ought to be a lover of children.”

Part II of the interview focuses less on the children’s audience and becomes increasingly more mature. His first song in this set, “Crack in the Wall,” was written in 2010 during the Gulf oil spill on the last night of his MFA program at Spalding University. As he sat at an outdoor plaza in Louisville, nursing a bourbon he was experiencing a closing chapter of his own life and began wondering where he and the world might go next. The song itself is decidedly prescient, as it is both true to those days in the last decade, and the days we live now in 2020.  His lyrics are filled with a hint of chaos and wonderment of the unknown — “Banks collapse, unsteady; Fear is on the rise./And the army of the devil / has us fixed within his eyes. / The drums fade up, the cannon’s roar, you can hear the bootheel squall; / We’re all betting on the angels / For one more crack in the wall.” The song fills two pools of attitude: one optimistic towards this metaphoric crack in the wall, and one pessimistic towards it. It is a real listening experience, as it brings forth multiple points of view and feelings that coincide with the uncertainty of our times.

Schricker finishes with his self- proclaimed best song, “Noli Me Tangere,” a song about one of Christ’s followers, Mary Magdalene. The song is a soft, heart wrenching ballad about unrequited love. In his falsetto, he lightly sings the title phrase between each verse, creating a feeling of longing and the untouched desires of the heart. The song’s tone in itself seems to mirror Magdalene’s now complicated history as her importance in the Bible is both threatened and debated. The somber tone and narrative reflect on Mary/Miriam and her journey after her last experience of Christ after the resurrection.  When asked about the theme of unrequited love, Schricker remarks, “Unrequited love can be recognized in the self as a trajectory for learning something new within the self. So, it works as a gift that comes back to you.”

Like a deep dive into the human psyche, Schricker’s songwriting possesses many honest, almost startling themes; even the most pure children’s song can turn out to be an analysis of something much, much more profound. We as humans are empathetic, creative, and intensely complicated beings. George’s songs seem to encourage the listener to live their lives as authentically as possible– to be present and alive with the world that surrounds them–to get connected. Whether it be to find your own Leafy to adopt or recognize your own cracks in the wall, these songs have something for everyone.

Moonlight will return on August 28th with friend of Kurt Vonnegut and accomplished author David Hoppe. Both parts will be archived for viewing on the Wild Rose Moon FaceBook page and at Wild Rose Moon Media YouTube Channel which can be accessed directly from wildrosemoon.com, where a list of upcoming shows can be found. Wild Rose Moon’s Moonlight is made possible by a generous grant from Gibson Insurance and the Gibson Foundation and from Marshall County Community Foundation and Marshall County Tourism.  Look for the upcoming fall schedule and poster online and about town.