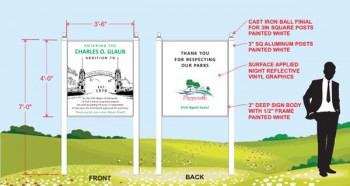 Plymouth Mayor, Mark Senter told the city park board this month that the signs have arrived to honor the 27th Mayor of Plymouth, Charles O. Glaub.

Glaub’s administration is responsible for acquiring the 78 acre expansion of Centennial Park beginning in 1970.  The dedication of the new park was in 1974. The property was obtained with the help of a Land and Water Conservation Fund Grant.

Senter said with the expansion of Centennial Park the Marshall County Blueberry Festival really took off.

Senter said the signs will be installed in mid September on Randolph Street at Plymouth Goshen Trail and near the Amphitheatre’s back stage drive so those entering the park will be able to see the signs.

Mayor Senter has scheduled a ceremony to unveil the signs on Saturday, September 26th at 10 a.m. in Centennial Park.

SJHS Recognized for Excellence in Infant and Maternal Health